Actress Pooja Ghai on the joy that is Rafta, Rafta 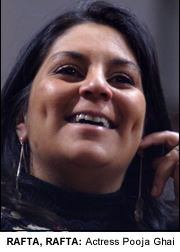 After a hugely successful stint at the National Theatre last year, Ayub Khan Din’s superb stage comedy ‘Rafta Rafta’ has taken to the road for a national tour. It kicked off in Birmingham at the end of January and is expected to be a sell-out. We spoke to actress Pooja Ghai who will be taking on the role of mum ‘Lopa Dutt’ to find out just why the play has become so popular.
The Rafta Rafta tour has kicked off in Birmingham. Are you optimistic about the tour?
Nicholas Hytner (Artistic Director, National Theatre) graciously handed over an already successful show to Iqbal Khan (Director of Rafta Rafta on tour) who has done very exciting work with us in rehearsals, which has re-inspired everyone…
So yes I am hugely optimistic about the tour, after a fantastic run in London over the past year it is exciting to take it out to the regional theatres and have audiences from around Birmingham, Manchester, Milton Keynes and Bradford experience and enjoy the magic that is Rafta Rafta
The production has received rave reviews since it took to the stage last year. Why do you think this is?
If you enjoy a good-humored family drama, come and see what all the fuss is about!!
What can audiences expect from the play?
Truth, Warmth, and laughter!
How did you get involved in Rafta Rafta?
I was auditioned and got the job as understudy to the characters of Lopa Dutt and Lata Patel. I guess you could say it was the classic understudy story… I had a chance to go on stage at the National during the London run. Luckily Nick Hytner saw that I could carry the part, and as Meera Syal was unable to do the tour due to other commitments, Nick offered me the part of Lopa Dutt…and as they say, the rest is history.
You play the character of ‘Lopa Dutt’ – a role that earned Meera Syal a number of plaudits. Will it be difficult to step into her shoes?
It is always difficult following someone as prolific, well known and talented as Meera Syal; but of course I wont be stepping into her shoes, but using my own!
Tell us a bit about ‘Lopa Dutt’
Lopa is a matriarch that has done everything in her power to keep her family together – she is generous, loving, unsentimental, and powerful and at times she has known to be quite naughty!! – I hope you get a chance to meet her!
Harish Patel – seasoned actor with over 800 films to his name. Surprisingly Rafta Rafta is his first theatre production. Did you give him some useful tips?
Harish Patel needs no tips from me; he is a fabulous comedic actor who instinctively knows how to play to an audience.
Audiences have been very mixed for the play. How refreshing is it to see non-Asian faces coming to watch the play?
It is refreshing, but not unusual. Very rarely is there an exclusively Asian audience for an Asian play, and that is never the intention. Ayub Khan-Din (East is East) has written a wonderful adaptation of Bill Naughton’s (Alfie) ‘All in Good Time’ – a family drama that is universal in its appeal and resonates with people from many different walks of life.
You’re career in the theatre speaks for itself, what made you want to become an actress?
Theatre is my family…I performed for the first time, I fell in love with it, I knew it was what I wanted to do…I never looked back.
You’ve also done some television work, is it something that you would consider doing more of?
Yes, of course. Being part of something with passion, resonance, character, truth and depth is what a good story is about, and being able to tell that story is always a joy, whichever medium that may be in.
Finally, what have you got lined up for the rest of the year?
I am a regular character on the radio soap ‘Silver Street’ which is aired on the BBC Asian Network, and has been running for nearly 4 years, so I will be continuing with that which is something that I thoroughly enjoy and feel very privileged to have been a part of it since the airing of its first episode. Two productions that ran in 2006 are set for possible re-launches in 2008/9, and of course the knock on effect of playing a role as fantastic as Lopa Dutt are not always immediate…so watch this space!
‘Rafta Rafta’ runs at the Birmingham Repertory Theatre until 16 February.
To book tickets call 0121 236 4455
Related Links:
WIN Tickets to see Rafta Rafta at the Birmingham Rep!