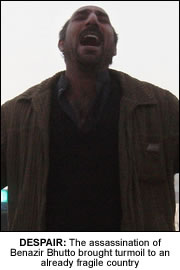 THE COUNTRY of Pakistan has commenced a new year in a terrible political state of turmoil after the death of Benazir Bhutto. Is this death symbolic of the beginning of democracy or the end of it? In all this uncertainty nobody has heeded the views of the ordinary Pakistani public and what life is actually like for them living in a leaderless, rioting nation which was in a distressing state of emergency. Saima Daar investigates…
“Terrorism, suicide bombings and add long hours of no electricity and gas, that’s Pakistan for you. The whole country is in a mess. No law or order, no democracy, no justice.   You can say our nation has become used to it” says 23-year-old, Muhammad Omer.
Since the death of Benazir Bhutto, Muhammad didn’t dare step out of his house for the first three days. His home is less than a kilometer away from where the rioting and burning took place in Lahore and even though he lives in a city where there is not much support for the Pakistan Peoples Party there is still much threat of violence.
“I don’t feel safe, not for me or my family. I prefer not to even visit the mosque due to the increase in bomb blasts. But besides the terrorism the over all law and order situation has been the same – non existent since my birth and in the last few days after the assassination of Benazir I didn’t dare to go out of my home for three days,” said the young businessman.
The death of Benazir has made a big impact on businesses, the factor of uncertainty has increased and there is much unrest. For Muhammad who has a family business of rice exporting there have been many obstacles to face since.
“The problems we have had to deal with are immense. There has been an unavailability of labour due to political unrest and rioting. The long hours of load shedding have been crippling the production and many orders have been cancelled by foreign buyers due to the political situation of the country. There is also no availability of transport to move goods because of the strikes happening every other day.”
Businesses to one side, as always it is the poor who are suffering the most as there is nowhere they can go to get their problems resolved and nobody to even discuss them with. With no leader or guidance where can Pakistan’s poverty stricken turn? 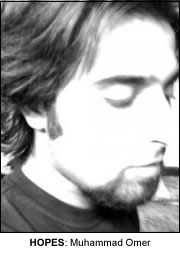 “Obviously democracy is the only solution for prosperity of any country but for a country like Pakistan I don’t think democracy could ever work unless we are able to eradicate illiteracy. I consider people of Pakistan as the main reason for the present condition of the country. They never chose a candidate on merit, in fact the only reason they chose a candidate is based on his/her caste or how powerful they are, so for me democracy comes AFTER literacy,” said the MBA postgraduate.
He predicts that the present state of affairs will result in another pseudo-democratic government like in the past, like many of the Pakistani youth today he is frustrated at the state of his country and sincerely hopes that the nation is able to overcome its many incurring problems. Muhammad desires fresh and sincere leadership and considers this the only solution to the problems of Pakistan.
“I would like to see Pakistan follow path of India, where even though politicians are corrupt but still they are sincere towards there own country, all differences aside they are striving together for a better economy and future,” he mused.
When asked why Imran Khan, an oxford graduate, cricketing legend and iconic figure in society is not popular with the Pakistani public on the political front, he replied, “He keeps on making mistakes. Keeps on changing his policies and stances, I think he still considers politics as a cricket field, which it is not by any means.”
Many like Muhammed believe that talks all revolve around the army, Nawaz Sharif and Benazir, people who have only looked after their own interests and done nothing for the people of Pakistan, but the basic problems and issues have not been discussed and still remain unresolved and untouched.
“In reality the real problems of our country are the unavailability of the basics – we have a poor law and order situation, illiteracy, no justice, shortage of energy supplies. I really wonder why I have never read or heard anyone discussing these real issues.” 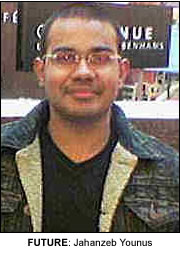 Many Pakistani’s such as 26 –year-old Jahanzeb Younus believe that it is indeed time for democracy in Pakistan and people should be given the freedom to choose who they want to represent them. However many believe that the probability of democracy being achieved is unlikely if benazir’s son, Bilawal Zardari takes over the PPP.
“Bilawal Zardari, 19 is a young boy who has been brought up in a foreign country and can even not express him self in Pakistani national language (Urdu). He is clean hearted, innocent and is unaware about dirty politics of Pakistan. He can not identify friend and foe. Bilawal has been nominated as a dummy chairman and on his back his father will be ruling PPP as he is not acceptable to reconsider because of being involved in corruption charges and victimization against Murtaza Bhutto.” Said the BA graduate from Bradford University.
Like many he opposes the decision to delay elections because Pakistan is in great need of leadership and remains vulnerable and insecure until a leader has been elected. Postponing the election process because will bring further crisis to the country.
When asked about his future aspirations and whether he believes they can be achieved in Pakistan the network engineer based in Karachi said, “Youth perceive their future as prosperous, progressive, secure if provided with guidance, encouragement and reassurance. But in Pakistan today, the system is not conducive for a better future of youth. Educational systems and economic systems are based on deal and hypocritical principles. In such an environment patriotic dedicated and righteous people have no place in future.”