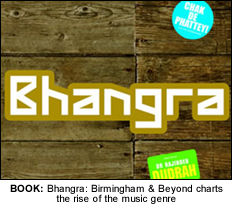 BHANGRA music has gone from an obscure 1960s Birmingham import to an internationally recognised art-form – says the author of the first ever history of the genre.

But according to Dr Rajinder Dudrah who is Head Of Drama at The University of Manchester, the music has had to struggle against cultural racism and community politics to stake its place in British popular culture.

The Senior Lecturer in Film and Media Studies charts the rise and rise of the mix of Punjabi beats and lyrics, UK pop, RnB, reggae, garage, grime and other world sounds in his new book Bhangra: Birmingham and Beyond.

Dr Dudrah said: “Bhangra has made a hugely important contribution to British popular music despite the attitudes of the mainstream music business.

“Even though the genre now is now taught in schools, it is still sidelined by the British music establishment.

“However it was ignored by Britain until American rap star JayZ used the tune.

“Bhangra music has now become a cultural backdrop: you hear it regularly for example in advertising.

“So surely it’s now time for it to be formally acknowledged by the music industry alongside our other major artists.”

With contributions from Ammo Talwar head of the Midlands-based Punch Records and photographer/music journalist Boy Chana, the book is now out.

The book draws on interviews with artists, lyricists and promoters of the Bhangra scene, including analysis of some of the lyrics and album covers to give a unique insight into the workings of British Bhangra music.

He added: “The book is the first ever to examine the social and cultural history of British Bhangra music, using the city of Birmingham as a starting point to map out Bhangra’s journey.

“Its folk beginnings were in the Indian Punjab, which became a fusion-based music in Post-war Britain.

“And nowadays it’ s crossed over into the mainstream through American Hip Hop artists and others using the Bhangra beat and sounds.”
Related Links:
Bhangra: Birmingham & Beyond – Photo Gallery