Home Uncategorised ‘I don’t compete with anyone’, Salman Khan 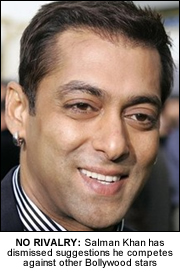 He added: “I like the people that I work with, if I don’t like them, I won’t work with them.”
Khan also spoke about his charity ‘The Salman Khan Foundation’ which he launched last year which offers some of India’s poorer communities’ health-related financial aid.
While Khan widely refuses to publicise his charity work, he hit out at the stars that do.
“I think it’s a big fraud to publicise the stuff that you do because I’ve seen people going and doing stuff and the whole press is there,” he said.
“That’s what I used to think actually, earlier. But today I feel that since I’ve opened this charitable trust, [The Salman Khan Foundation],  I have realised that you have to go out and you have to publicise that and I’m still not coming to terms with that because I feel like a fraud.  I’ve seen a lot people who are doing a lot of good things with all the wrong intentions and I don’t think that works.”

“I’m putting a lot of my own money into the foundation which people do not do.

“I’ve started painting and from my art the money goes into my organization.”
Khan is regarded as one of Bollywood most bankable stars alongside his Khan namesakes Shah Rukh and Aamir.
But recent troubles with the law have seen him slip down the Bollywood pecking order while both Shah Rukh and Aamir have continued to gain fan and industry recognition.
Related Articles
Salman unveils waxwork – Watch the Video here