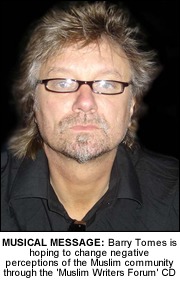 MUSLIMS are not terrorists – that is the message behind a new music CD compiled by a Birmingham music supremo.
50-year-old Barry Tomes from Birmingham is not a Muslim, nor does he have any connections with Muslim groups. But in an act of compassion he has collaborated with a number of Muslim artists and released a CD, entitled Muslim Writers Forum, in a bid to show Islam as a peaceful religion.
The CD, featuring a picture of the city’s Central Mosque, will not be sold, instead Mr Tomes has offered it free.
Speaking to The Asian Today, Mr Tomes, who boasts over 35 years experience in the music industry, said he was keen to disprove common negative perceptions of the Muslim community.
“As a Christian I have lived side by side with Muslims all my life in perfect harmony,” he said.
“As a young boy I would pass the Central mosque on the Number 8 bus with my mother and I always thought the building was different to our church. Bless my late mother she told me it was a church from the Middle East.
“I spent 10 years travelling with western artists to the Middle East and I of course came into contact with many Muslims but I never had any issues.”
During 2006 Mr Tomes became increasingly aware of the continued bad press being directed towards the Muslim community and after reading an insightful article in Islam Magazine he decided he had to act.
“I thought what can I do, what can I use, I have no weapons only music,” he said.
Last year he spent time meeting a number of Muslim artists through his Creative Insight music seminars at the city’s Birmingham Library.
It was during this time that he came up with the idea for the CD with material written by Muslim artists. He also secured collaborations with non-Muslims to give the project a unifying theme.
He admits some of the artists approached were “bemused” at the thought of a non-Muslim wanting to create such a CD, but he says he is “incredibly proud” of the finished article. 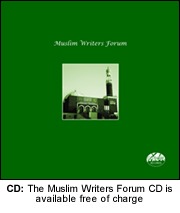 Since releasing the CD online for music enthusiasts to listen, Mr Tomes says he has been inundated with requests from across the world.
“I am thrilled with the response and encouragement I have had,” he says.
“Twenty-four hours after putting information about the CD online we have had requests for the CD from over 50 people from USA, China, Germany, Sweden and of course across the UK.
“I only pressed 1000 copies and I feel sure every one of those copies will be taken.”
Seeing how well the CD has been received Mr Tomes is optimistic it will “help people have a view they never had before about Muslims.”
And his hopes of changing people’s perceptions about the Muslim community do not end here.
He will be releasing a full album by Muslim artist Khaliq who featured on the CD, as well as looking into the possibility of putting the CD’s artists together for a string of live performances.
Log onto http://www.wgic.co.uk/forum/ to listen or download tracks from Muslim Writers Forum