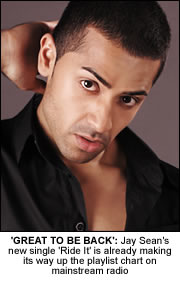 FANS of Asian R&B star Jay Sean will be able to meet the star in the flesh next week when he embarks on a week of HMV instore signings in the run up to the release of his new single.
The star, back with his new album ‘My Own Way’, will be signing copies of his new single ‘Ride It’ across five cities.
The single has already received rave reviews across the mainstream media and has featured heavily on top radio stations including Galaxy and Radio 1.
Jay will kick off the tour at the High Street branch of HMV in Birmingham on Monday 21 January at 5pm.
In an interview with The Asian Today last November, the popstar said he was excited about being back in the musical limelight.
He said: “It’s great to be back! I’ve spent a long time touring internationally and away from home so it’s a great feeling to be back in the UK with a brand new album.”
Ride It is released nationwide on Monday 21 January.
Jay Sean instore HMV signings:
21st January at 5pm –   HMV Birmingham, 38 High St
22nd January at 5pm –  HMV Leicester, 9 High St
23rd January at 5pm –   HMV Croydon, 137 North End
24th January at 4pm –   HMV Uxbridge, The Chimes
25th January at 5pm –   HMV Leeds, Headrow Centre
Related Articles:
Interview: Jay Sean