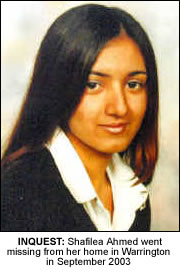 THE FATHER of a 17-year-old found dead in Cumbria admitted he was surprised when she went missing from home, an inquest has heard.
Shafilea Ahmed disappeared from her home in Warrington in September 2003.
Her badly decomposed body was found by workmen close to the flooded River Kent at Sedgwick, near Kendal, Cumbria, in February 2004.
Iftikhar Ahmed told an inquest at County Hall, Kendal, today that she was a “bright child” but “problems arose” when she began her sixth form studies.
South Cumbria Coroner Ian Smith asked Mr Ahmed: “When she went missing, was that a surprise to you?”
“Yes,” replied Mr Ahmed.
He added his daughter’s ambition was to become a solicitor and he was proud of her achievements.
Shafilea was last seen at her family home in Warrington on September 11 2003, a few months after refusing an arranged marriage.
During an earlier visit to Pakistan to meet a prospective husband, she had drunk bleach and spent five weeks in hospital.
Shafilea’s parents Iftikhar and Farzana Ahmed were originally arrested and questioned along with eight other family members in connection with their daughter’s death.
Suspicion had fallen on the family after it emerged a missing person’s call to police was actually made by Shafilea’s college eight days after her disappearance.
They were released without charge and have maintained their innocence.
Shafilea’s  parents, who have offered a £5,000 reward to catch their daughter’s killer, have accused Cheshire police of racial stereotyping.
The inquest is expected to hear from a number of family members, who have described Ahmed as a “westernised” teenager pulled in different directions by her Islamic upbringing and her love of R&B music and British fashion.