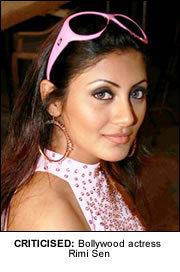 Bollywood actress Rimi Sen has cooked up a storm after insulting the African community in a recent interview with an entertainment website.
The Himalayan Times reported that the actress said during an online interview with Nithin Sethi of Glamsham.Com: “I play a sweet and beautiful girl in the film. The best thing that I like about the film is that though it has four heroes, I am the only heroine. Rohit Shetty is amazing as a director. He can make even a black African look pretty.”
The actress has now has been criticised by journalist and human rights activist Deborah Gabriel and a prominent Bangladeshi-born researcher in the US.
Commenting on the actress’s remarks she said: “This demonstrates that the legacies of the enslavement of African peoples and its dehumanising process and the derogatory theories espoused through scientific racism, still persists in the mindsets of people like Remi.”
Horen Tudu, a Bangladeshi born US based researcher who has publicly condemned caste discrimination said: “This is a reflection of the strong anti-African bias of Bollywood but also a larger reflection of the Hindu caste system and perceptions of race in the Indian Sub-continent. I think most of the Indians/Hindus in the UK keep these ideas submerged in their minds but would not have the courage to voice them in a multicultural society like the UK.”
He added: “I have heard stories of African students from the continent studying in India in the 1990’s enduring racist comments and laughter being thrown at them by Hindu students and teachers in class, forcing them to return to Africa early. Deborah Gabriel condemned Rimi’s remark as totally unacceptable:
Indian radio station radiosargam.com also condemned Rimi. It said: “The respectability of online Bollywood websites once again comes to attention…On behalf of the African people, we here at radiosargam.com, would like Glamsham to apologise for publishing this interview and print a formal retraction.”