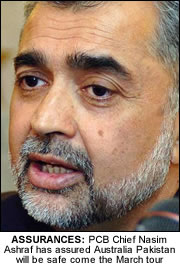 THE PAKISTAN cricket team may be forced to play the forthcoming home series against Australia on neutral ground following current unrest in the country.
The assassination of former PM Benazir Bhutto has led to widespread unrest in the country.
And despite the visit of Australia being two months away there is the possibility they will refuse to travel to the country if they feel it is unsafe to do so.
Nasim Ashraf, head of the Pakistan Cricket Board (PCB) however has tried to calm the situation assuring the touring Aussies that they will receive the highest level of security when they arrive in Pakistan in March.
He told The Age: “If you look at the history of our country, sporting teams have never been targeted, even during periods of great political turmoil.
“We are hoping and expecting the Australian tour to go ahead. The recent tragic events have caused a state of mourning and shock, but I expect the situation to calm down.”
But despite his reassurance ICC chief Malcolm Speed said there was a possibility the tour could be moved to a neutral venue or to Australia itself.
“Security can’t be guaranteed anywhere,” he said.
“Cricket is played in some dangerous countries. “Wherever possible we would like to see cricket tours that are scheduled to go ahead.
“It has been a long time since Australia has played in Pakistan and there will be many Pakistani fans who are waiting for this great Australian team to come and play against their team,” he added.
The Australian cricket board themselves will travel to Pakistan on the eve of the tour to assess the security situation themselves.
A security delegation will travel to Pakistan next month and will report their findings before a decision is made on whether Australia will take part in the tour.

Hundreds turn out in memory of Ricky Bhalla