Amara Karan gets cosy in Hollywood 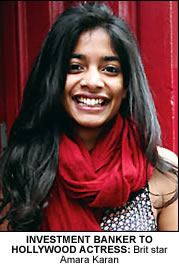 For many aspiring actors, taking the decision to turn your back on a financially sound job in search of the red carpet is not an easy task. But for British actress Amara Karan there was no choice. The young actress gave up her career as a London investment banker to fulfil her acting dreams and no less than two weeks after leaving drama school she bagged her first major role in Wes Anderson’s The Darjeeling Limited opposite Hollywood’s Owen Wilson, Adrien Brody and Jason Schwartzman.
We caught up with the actress to find out about her new found fame.
.
The Darjeeling Limited, your debut film, is out today. Are you excited, nervous?
Yes I am very excited about the film opening here. I want to share my hard work with my friends and family. I’m really proud to be in a film of this calibre.
You went from Oxford graduate to investment banker to actress. That’s quite a career change! What made you want to leave the corporate world for the red carpet?
I left the corporate world because theatre has always been my passion and I have always used it as my emotional outlet and to express myself throwing myself into it throughout school, university and outside too.

Although I enjoyed the challenge of banking and learnt a lot, I wanted to work for myself and run my own business which is a lot more rewarding. I was also very confident about my talent for acting as I have always secured roles in competitive auditions and always got great feedback and reviews.
How did the film come about? I believe you auditioned for the role two weeks after leaving drama school. That’s quite a fete to land a major audition to soon after leaving
The opportunity to audition for this film was my lucky break. That it came so soon after finishing drama school was immensely fortunate but I knew that my chances of success had doubled when I signed with a top talent agent on leaving drama school. 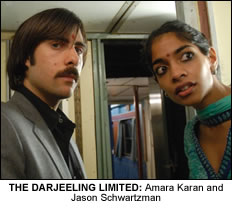 How did you feel when you were told you’d landed the role of ‘Rita’?
I was told that I got the part after my last set of auditions opposite Jason which were in India. I was told swiftly and then the schedule for the next couple of days was explained which I had to take in and then we all had to move on and I was taken back to my hotel. It was all such a rush that I didn’t have time to process it. I think I felt great relief and was very emotional because it endorsed my belief in myself and my hard work had really paid off.
Tell us a bit about your character
My character Rita, is the enigmatic stewardess on the train and girlfriend of the Chief Steward. She is hopelessly restless and undertakes some unexpected impulsive actions to the delight of the youngest brother who samples a bit more than just her sweet lime!
What was it like being on set with on-screen brothers’ Owen Wilson, Adrien Brody & Jason Schwartzman?
Being on set with Owen, Adrien and Jason was a brilliant learning opportunity. They were all very hard working and very professional which I didn’t expect of Owen because of his on screen persona. I noticed he never plays for the laugh just goes about trying to make the scene as truthful as possible so when it is funny it is organically so. Jason would always keep morale up after a long hard day making jokes and coming out with the most obscure metaphors. Adrien always had an encouraging word and had fascinating filming experiences to share. It was fun exploring India with them and they were all so supportive of me.
Your character ‘Rita’ winds up having a whirlwind affair with ‘Jack’. What was it like getting close to Jason?
The scenes of physical intimacy were made so much easier by Jason’s professionalism. In any scene when the actor you are playing opposite is so good and so truthful it automatically draws you in. In fact you don’t have to do anything. You just respond to them and what they are doing.

So I was blessed. Furthermore Jason is a person that always goes out of his way to make everyone feel at ease.
What was it like shooting in India?
Rajasthan was where the film was shot in India. It is a desert environment and there is a beautiful simplicity to the arid environment that we travelled through on the shooting train everyday. The people are very friendly and love foreign visitors. They are very proud of their culture and always jumped at the chance of sharing it with us. The state has some of the finest textiles and handicrafts in the world. I was also humbled to be surrounded by such beautiful women. 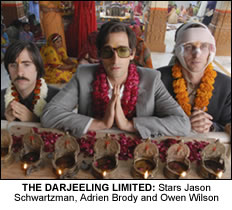 The man behind the film, Wes Anderson, is a great director. What was it like working alongside him?
It was a dream come true to be working with Wes who prepares so meticulously and puts so much thought into his work. He works with the best talent in every department and really knows each area himself. It’s his singular vision that for me makes him an iconic director. Working with someone who has so much faith and trust in their ability, tastes, opinion and point of view, is a chance few people get.
He has a knack of using the same actor more than once – Are you hoping to get a call from him in the future?
I do very much hope he selects me to work with him again but I would never take anything for granted and will continue to work hard to develop my ability to tell stories through the craft of acting.
You went from The Darjeeling Limited straight to your next film, St Trinian’s, and opposite some even more dishy actors! How did you manage to pull that off?
The week I got back from shooting The Darjeeling Limited, I was invited to meet the casting director of St. Trinian’s who had heard about me getting this special role. I knew the St. Trinian’s films from the 50’s and 60’s and really wanted to be in this film. Having convinced her I then read for the directors and producers who cast me as Peaches one of the ‘ Posh Totty’.
Finally, what other projects have you got coming up?
I am currently filming Agatha Christie’s POIROT (out 2008). The crime takes place at an English girls boarding school in the 1920’s and I’m playing the Middle Eastern Princess Shaiste who enrols at the school on fleeing the revolution in her country.
Amara Karan was speaking to Zakia Yousaf
The Darjeeling Limited is out on 23 November 2007
Related Articles:
Passenger to India – How Wes Anderson took India to Hollywood