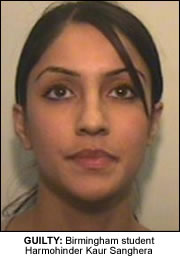 A BIRMINGHAM Dentistry student who murdered her lover’s pregnant wife will spend the next 14 years of her life behind bars after being found guilty.
23-year-old Harmohinder Kaur Sanghera, from Solihull, Birmingham, murdered 17-year-old Sana Ali in a “sustained and ferocious” attack after finding out she was pregnant in May this year.
Manchester Crown Court was told Sanghera had been in a relationship with Sana’s husband, Sair, for almost two years and drove to his home in Bury on 11 May where she stabbed pregnant Sana to death.
She had 42 separate wounds to her body, including one to her abdomen which was 19cm deep. She was 11 weeks pregnant.
Sasha Wass, defending, had told the Manchester Crown Court Sanghera was not the killer, instead placing the blame on Sana’s husband Sair Ali.
But the jury returned a majority verdict saying Sanghera inflicted the 42 stab wounds that killed the pregnant teenager.
The Birmingham University student was jailed for life and told by Judge John Saunders that she would not be eligible for parole for 14 years.
The Judge said: “On the verdict of the jury you have killed the wife of your lover. She was 17. She was an entirely innocent member of this triangle. She was trying to make this marriage work and she was 11 weeks pregnant at the time of her death, a fact of which you were well aware.
“You waited until you could be sure nobody was in the house. “You tried to disguise her death as suicide. That was unsuccessful because she fought to save her life.”
Manchester Crown Court heard how Sanghera murdered Sana in an act of “jealousy and desperation” and was “obsessed” with Sana’s husband, Sair Ali.
The court was told Sanghera, a Birmingham University student in her final year of exams, had been in a relationship with Mr Ali for two years after they were introduced by a mutual friend. 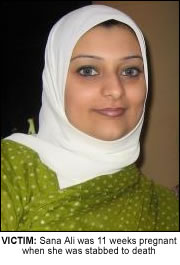 Mr Peter Wright QC, prosecuting said: “From the outset Sair Ali lived a lie. He did not tell the defendant he was engaged to be married. As the relationship became more serious Sair used religion as a pretence for a reason why it could not last.”
He added as the relationship progressed Sanghera became more infatuated with her married lover, even considering converting to Islam to be with Mr Ali.
When he returned from a trip to Pakistan in which he married Sana Ali he lied to Sanghera, saying he went on a pilgrimage to Saudi Arabia.
He eventually told her of his trip to Pakistan but told her he was engaged.
Mr Wright said he did not have the courage or decency then to tell her the truth that he was, in fact, married.
By this time, the Crown says, Sanghera was “infatuated” with Mr Ali and was “obsessive” in her pursuit of him.
Soon after, in March, Mr Ali told her his wife was pregnant but in a bid to keep the affair alive she said she was prepared to become his second wife.
He refused but eventually relented and the pair took part in a muta marriage ceremony, a temporary arrangement which allows a man and woman to live as husband and wife for a specified time.
In their case the time limit ran out on May 16 – five days after Mrs Ali was found stabbed to death.
The court was told on May 11 Sanghera drove from her home in Birmingham to Bury armed with a knife.
Later that day Sana’s family members found the teenagers blood-soaked body in her bedroom. She had been stabbed 42 times including a 19cm stab wound directly into her abdomen.
When arrested Sanghera told police she had gone to the house to tell Sana about her relationship with Sair.
She said the two of them had chatted and she left Sana “alive and well”.
But her footprints were found on a work surface in the kitchen near the window which the prosecution suggested was how she left the scene. 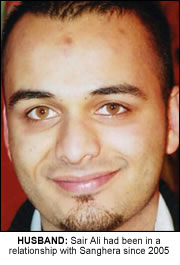 Speaking after the verdict Detective Superintendent Jane Antrobus from Greater Manchester Police’s Major Incident Team said: “This is an absolutely tragic case.
“Sanghera was jealous and desperate and went to incredible lengths to try to save her relationship the result of which was this horrific murder.
“These terrible circumstances have wrecked two families – both Sana and Sanghera’s family have lost their daughters. Sana was an innocent victim who did not deserve to have her life, and that of her unborn child, taken in this way.
“I know it has been very difficult for Sana’s family, particularly her mum, to hear about the circumstances surrounding her only daughter’s death and the loss of her unborn grandson, I just hope that she can somehow now find some sort of closure and try to move on with her life.”
Sana’s father in law, Zafir Ali, said: “We are thankful the jury saw beyond the smokescreen that was created by the evil lies of Harmohinder Sanghera, projected by her defence, family, friends and affiliates.
“This day brings us no joy as we have lost our Sana, A beautiful wife, daughter, sister and mother-to-be.
“We will forever miss you Sana.
“It remains for me to say a genuine thank you to the prosecution, CPS, Police and the wider public. We kindly ask that you allow is to grieve in peace as justice has now prevailed.”