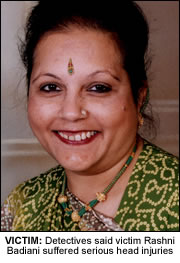 THE FAMILY of one of two women found dead at a Leicester nursing home have spoken of their despair as detectives released the names of the victims.
56-year-old Rashni Badiani and 72-year-old Radhaben Chauhan were found dead in a room they shared at the Hayes Park Nursing Home on the Rowlatts Hill Estate, Leicester shortly before 4am yesterday morning by a member of staff.
Detectives believe someone gained entry to the women’s room from the outside via a ground floor window.
A statement released by the family of Mrs Chauhan said they were still coming to terms with the murder.
“Our Mother was a beautiful, bright, warm person, whose smile could brighten up a room,” the statement said.
“We cannot believe what has happened, we are still trying to come to terms with the fact that we will never get to see that beloved smile again.
“She was a lady who was loved very very much a dear Sister, Mother, Grandmother and Great-Grandmother who will be sadly missed.   We appreciate the messages of support, but now ask that we be allowed to grieve in private.”
Post-mortem examinations took place last night at the Leicester Royal Infirmary and officers are now waiting for the results of further tests to confirm cause of death for both victims.
Detectives did reveal however that Mrs Badiani, who had been a resident at the home since December 2004, sustained serious head injuries. Mrs Chauhan had only come to the home in August this year.
Detectives are still questioning a 19-year-old man in connection with the murders.
Detective Superintendent Chris Thomas, who is heading the investigation, said: “The arrest is a significant development in this double murder investigation but our enquiries into the circumstances surrounding the deaths are continuing.
“Detailed forensic work is still going on at the scene as we work to piece together the chain of events that led to the deaths. Initial results of the scene examination and evidence gathering throughout the day yesterday leads us to believe that someone gained entry to the women’s bedroom from the outside via a ground floor window.
“We are awaiting the results of further post mortem tests to confirm the cause of death for both victims and we are hopeful that the results will give us a clearer picture of the circumstances which led to the deaths.
“Our minds are still open as to the motive for this crime but the ongoing investigation may reveal more as time goes on.
“We continue to work closely with the directors and staff at the home who continue to co-operate fully with the police investigation in difficult circumstances.
“Our thoughts are with the families of Mrs Badiani and Mrs Chauhan at this time. Their tragic loss has left both families devastated and specially trained family liaison officers continue to support them.”
A spokesman on behalf of the directors and manager of Hayes Park nursing home said “We have all been stunned with the events that have occurred since the early hours of Wednesday morning.
“A death is always difficult to come to terms with and even more so in these terrible circumstances. Our sympathies and prayers go to the relatives of the two ladies who were the victims of this attack.”