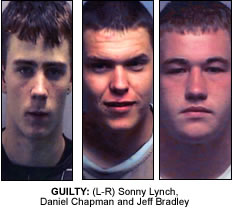 THREE men who beat two Asian men in a racially motivated attack in Leicester have been found guilty at the city’s crown court.
Sonny Lynch, Jeff Bradley and Daniel Chapman, were all convicted of causing grievous bodily harm with intent for the attack which occurred in October 2006. Lynch and Bradley were also convicted of Section 18 Wounding.
Their victims, two Asian men in their 20’s, were praised by detectives today for helping to bring the men to justice.
Leicester Crown Court was told the two Asian men, both aged 23, were visiting the Netherhall area, in Leicester, with two friends to show a car to a prospective buyer on Saturday October 7 when they were attacked.
Their two friends were able to escape but the two victims were chased and caught.
The men were punched and kicked, verbally abused and threatened with a knife.  A pair of home-made ‘Nunchakus’, a martial arts weapon, were also used during the attack. 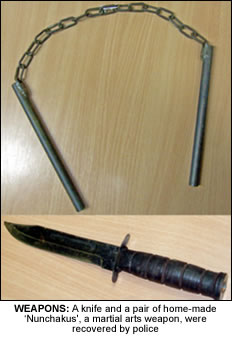 The incident left one of the 23 year-old victims with serious head injuries which required lengthy medical treatment.
Detectives said he is only now starting to get back to some normality in his life and his injuries still require medication a year on. The other man sustained more minor injuries, but the trauma has left him withdrawn and unable to work.
Detective Inspector Dave Richardson said: “This was an appalling attack on two men who were visiting the area. It was violent and racially motivated and happened in a busy place in front of passers-by.
“The victims have suffered badly both in terms of injuries but also in the long-term effects such an unprovoked and vicious attack has caused. Their bravery in giving evidence despite this is commendable and has ensured justice has been done.
“I must also praise the local people who witnessed the incident and came forward to give evidence against the perpetrators. It is not easy to stand up to people who come from your own area in these circumstances but by pulling together and speaking out, the Police and the Crown Prosecution Service have been able to mount this successful prosecution.
“Thankfully this kind of incident is rare but Leicestershire Constabulary takes all reports of racially motivated incidents seriously and we will do all in our power to put the people responsible before the courts. The police team worked hard to secure these convictions and I thank them for their dedication throughout the year-long investigation.”
All three men have been remanded into custody and await sentence on December 7, 2007 at Leicester Crown Court.