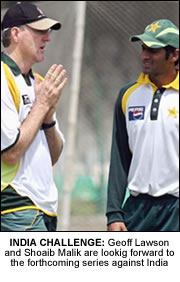 PAKISTAN coach Geoff Lawson geared up for his first India Pakistan series clash, saying it was bigger than the Ashes.
Lawson, who took over from Bob Woolmer as coach of the national side, is yet to experience the intensity of the Pakistan India series but said he was looking forward to it.
“Having toured India on a number of occasions I know people follow an India-Pakistan match with extreme passion and at times it is a bit more than the sport, bigger than the Ashes, so I look forward to it,” he said.
Both teams will be hoping to put recent bad results behind them when they kick off the start of five ODI’s when they meet in Guwahati on November 5.
While India will be looking to restore some pride after a disappointing one-day series loss against Australia, Pakistan, who were narrowly edged out by South Africa, will be hoping to avenge their Twenty20 world cup final defeat.
Lawson, who will be hoping returning fast bowler Shoaib Akhtar will make the headlines for all the right reasons, said fresh faces in both teams will make the encounter “exciting”.
He said: “The exciting thing is that new stars are replacing the superstars in both the teams. There are a couple of exciting newcomers, so all in all it’s good progress for both the teams,” he said. “India have a balanced squad with a combination of good spinners and fast bowlers and Pakistan match them. I think a good bowling spell, a great innings or a few good catches can make the difference in the one-day series.”
Pakistan captain Shoaib Malik meanwhile said he was confident his players will not be going into the India series with thoughts of their disappointing loss against South Africa.
“I do not think we will go to India with any negative thoughts in our mind. Our players are capable of handling the pressure,” Malik told PTI. “The Indian tour is going to be a challenging one as they are also rebuilding their team. But we have learnt a lot from the series against South Africa.”
He also welcomed the return of Shoaib Akhtar who took four wickets in the final ODI against South Africa following a 13-match ban.
And his return will matter even more to Pakistan who were dealt an injury blow to Mohammed Asif ruling him out of the first three ODI’s at least.
“He is a big asset to the team when he is fully fit and he showed he is hungry for success by bowling very well despite making a comeback after such a long time,” Malik said. “It is great to have Shoaib back for the Indian tour.”
For India, ex-captain Rahul Dravid has been left out of the first two one-day matches. Chief Selector Dilip Vengsarkar said they were keen to give the 34-year-old a break.
Virender Sehwag and Gautam Gambhir have been recalled to the squad.