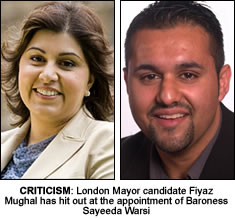 LONDON Mayor candidate Fiyaz Mughal has hit out at the appointment of Sayeeda Warsi as the new Shadow Minister for Social Action for the Conservatives in light of her recent comments on immigration.
The Liberal Democrat candidate described her appointment as “rewarding alarmism” after she was accused of risking a race row by arguing that the influx of people from abroad was jeopardising community cohesion by “unsettling” local people.
While many accused Baroness Warsi of endorsing “racist” BNP views, Conservative leader David Cameron jumped to her defence who said she had dedicated her political life to “fighting the BNP street by street”.
But Mr Mughal said her comments could not be ignored.
“Sayeeda’s appointment as the new Social Action Shadow Minister is providing accolades and titles to an individual who has recently stated that those who support the British National Party have legitimate views,” he said.

“Sayeeda has been on the road promoting the notion that we are on the brink of community divisions due to migrant groups moving into areas. This undermines the good community relations work being done by the voluntary and community sector and local authorities throughout the UK.

“Her alarmist talk also undermines the resilience and tolerance of local communities throughout the UK and questions the very element of Britishness, which is about tolerance, fairness and social justice.”

Baroness Warsi, who is also a community cohesion spokeswoman for the Conservatives, sparked outrage in September when she said supporters of the British National Party held “legitimate views” on immigration and crime.
She said: “The BNP will look at what issue it is locally that they can exploit and the other political parties are not seen to be dealing with and they will play to that.
“The BNP and what they represent, they clearly have a race agenda; they clearly have a hate agenda.
“But there are a lot of people out there who are voting for the British National Party and it’s those people that we mustn’t just write off and say ‘Well, we won’t bother because they are voting BNP or we won’t engage with them’.
“They have some very legitimate views. People who say ‘we are concerned about crime and justice in our communities – we are concerned about immigration in our communities’.
But her views were not shared by all. Simon Woolley, of the anti-racist group Operation Black Vote, said: “Pandering to the racist views peddled by the BNP and bought by the BNP voters is wrong.”