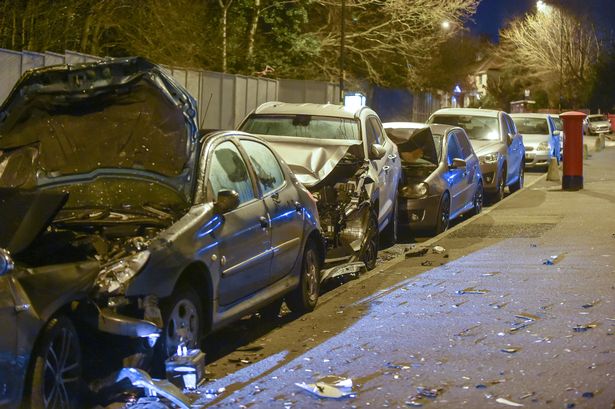 The suspect was driving a £25,000 VW Golf before smashing into a row of vehicles on Handsworth New Road in Handsworth.

A suspected drink-driver left a trail of devastating damage after smashing into four parked cars – before going on to SPIT in a policeman’s face.

The man also allegedly threatened to kill the arresting officer’s children and to bite his nose off while bragging about being a drug dealer.

The suspect was driving a £25,000 VW Golf before ploughing into a row of vehicles on Handsworth New Road late on Monday, February 11.

The cars completely crushed and squashed together include a blue Peugeot 206 and a silver SUV, and bonnets can be seen completely sprung open – such was the power of the impact.

Glass and debris was scattered across the pavement as officers worked to clear the scene early this morning.

“The driver of the Golf struck 4 cars and also spat in the arresting officer’s face!

“He is in custody and off to spend a night in the cells and some serious Question’s in the morning.”

A spokesman added: “In custody this male has threatened to kill the arresting officer’s children and bite his nose off.

“Bragging about being a drug dealer and gangster.

“In the morning, when he remembers his 25K car is wrote off and he is actually going to prison, he won’t be so smug.

“Best place for him.”

A spokesman for West Midlands Police said: “This incident happened at just after 12.10am. Officers were called to Handsworth New Road near Great Western Close.

“A 38-year-old man was arrested on suspicion of drink driving, failing to stop and assaulting a police officer. He remains in police custody for questioning.”