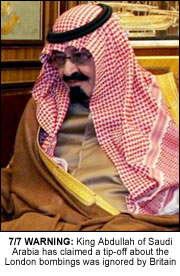 KING ABDULLAH of Saudi Arabia has claimed Britain ignored a tip-off which may have averted the 2005 London Bombings.
In a BBC interview, King Abdullah, claimed his country had passed on information which could have stopped the bombings which killed 52 people, but was ignored.
The comments come on the eve of his state visit to the UK – a visit that has in itself courted controversy.
Speaking through an interpreter he told BBC journalist John Simpson: “We have sent information to Great Britain before the terrorist attacks in Britain but unfortunately no action was taken. And it may have been able to maybe avert the tragedy.”
He also criticised Britain’s record on terrorism saying they needed to do more in the global fight against terrorism.
The official start of his state visit is expected to begin tomorrow when he will meet with the Queen, as well Prime Minister Gordon Brown.
But one politician who has refused to meet with King Abdullah is acting Liberal Democrat leader Vince Cable who announced that he would be boycotting the visit.
Furthermore protests are expected to take place tomorrow outside the Saudi embassy in London in protest at the kingdom’s human rights record.