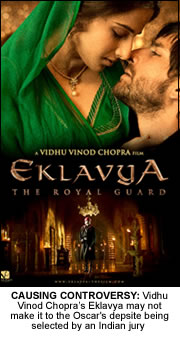 INDIA may have to do without an entry in the Oscar’s next February after a filmi war broke out over the official selection of India’s representative.
The Indian Oscar selection committee chose Vidhu Vinod Chopra’s Saif Ali Khan starrer Eklavya: The Royal Guard to officially represent the industry in the star-studded ceremony in America next year.
But the choice has rattled a few feathers, none more so than that of Bhavna Talwar whose critically-acclaimed film ‘Dharm’ was beaten by Eklavya to the coveted honour.
In true Bollywood style she has cried foul and has not only accused the jury of treating her entry unfairly, but also accused certain jury members share close ties with Chopra.
As a result The Hollywood Academy of Motion Picture Arts and Science has questioned the jury’s selection and has given India an extended deadline in which to deal with the controversy.
Bhavna Talwar told The Times yesterday: “Because of some biased individuals, I’ve been denied my right to go to the Oscars.
“An aesthetic decision has not been made – we have much better films in India. This sort of thing has been going on for some time. There’s an absolute lack of accountability in the decision-making process.”
She claims three jury members have unfair links to Chopra having worked on at least two of his films. While the The Indian Oscar selection committee have denied the accusations, the court system in India has agreed to hear Ms Talwar’s case leading to a strong possibility that India will miss it’s final deadline to submit an entry for next February’s Oscars.
Chopra meanwhile said the jury’s decision had to be “respected”.
In a recent interview he said:“The Oscar nomination is not an award for the most popular film in India . . . Eklavya was chosen by the jury and the decision should be respected. If the court stops me, there will be no entry from India this year. How shameful will that be? People say India is corrupt. . . we will only be endorsing that reputation.
“Ms. Talwar is creating a controversy which can only damage the Indian film industry’s reputation internationally. I am very sorry that this had happened”.


Eklavya: The Royal Guard flopped at the box office while Dharm, Ms Talwar’s debut film, proved to be a surprise hit at Cannes earlier this year.