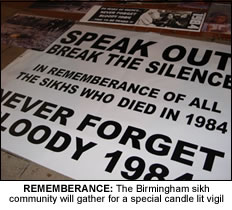 MEMBERS of the Sikh community will gather in Birmingham next month to remember those killed during the Indian massacres of 1984.
Hundreds of people will come together in Chamberlain Square on 7 November for a candlelit vigil in memory of the anti-Sikh uprisings in India 22 years ago.
Organised by the British Organisation of Sikh Students, the service will also remember thousands of Sikh soldiers who died during the first and second world wars.
A spokesperson from the organisation said the lives of those killed on the battlefield and during the 1984 massacre should not be forgotten.
“The sacrifice of thousands of Sikh libertarians goes unmentioned year on year. This year the Sikh community is remembering the courage of Sikh soldiers from the fields of Punjab, the jungles of Burma, the plains of Africa to the poppy fields of Europe. Wherever they served humanity, they fought tyranny, oppression and injustice.
“The commemoration this year is marking twenty three years of impunity since Operation Bluestar and pogroms of Sikhs in India during November 1984. In disgust that their counterparts in Northern India had overseen the genocide of Sikhs, Sikh soldiers deserted barracks across India. Thousands of these Sikh soldiers were killed, hundreds have languished in prisons since.”
Thousands of Sikhs died in the aftermath of the assassination of the then Indian Prime Minister Indira Gandhi in 1984.
Since the massacre Sikh communities across the world have campaigned for charges to be brought against high members of the Indian administration they believe to have been responsible for the massacre.
The candle lit vigil will also mark the official launch of a campaign to raise funds for the prosecution case that is being prepared by victims of the 1984 genocide against re-elected Indian MPs and Congress party officials serving on the current Indian administration.


The vigil will be held between 4 – 7pm on Wednesday November 7 in Chamberlain Square.