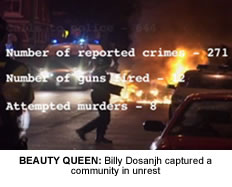 With the 2005 Lozells riots in full swing, most of the residents cowered behind closed doors afraid to even see what was happening on their doorsteps.
But one man, armed with a camera, looked to bring the unrest to the documentary screen.
‘Beauty Queen’, a documentary by Billy Dosanjh, explores the events leading up to the riots and examines the questions of whether the local community is mired indefinitely in segregation. The 40 minute documentary was scheduled for a screening at the Midlands Arts Centre earlier this year but was forced to take a back seat as an ongoing murder trial relating to the events of 2005 took place.
Free from restraints, ‘Beauty Queen’ is now back and will play at the mac tomorrow night.
We spoke to the man behind the documentary to find out when led him and his camera to the unrest in Lozells.
What do you remember of the Lozells riots?
I was nearby in a pub in Handsworth having a beer with my father. The scale of the trouble was evident as an endless procession of police cars sped past the entrance. A sense of unrest and anxiety grew as customers, some I know, were receiving calls from clearly very frightened family members and friends who were close to the epicentre of the disturbances. The landlord was so concerned by the lawlessness he locked both the front and back doors.

Was there ever any concrete evidence as to what initially provoked the riots, whether it be the alleged rape or just hostility between rival gangs?

First, it is important to drop the rival gangs element to any discussion. The way people formed during these disturbances is not typical of rival gangs. It was far more sinister that that. Many youngsters in the local area gathered on grounds of race and again not as gangs. You won’t find gangs in which Pakistani, Bangladeshi and Sikhs are together. But these disturbances bought them together.

The initial provocation was a very sinister artifice designed to fuse unrest. The police found no evidence of an assault and certainly not by over a dozen men. The alleged victim never came forward. I strongly suspect, as is the general consensus of opinion in the affected areas, that she is a fiction.

Do you think the media were very one-dimensional in reporting the issues surrounding the riots? Was the incident more than just a ‘race riot’?

I felt the media were only able to penetrate the cosmetics. No journalist gave a real sense of what was happening. If you look at the incident, it is loaded. We have race, gender, illegal immigration, murder, rape, economic inequality, civil unrest, partisan politics, and so forth. If taken separately, these are issues we often discussed in the public realm. When taken together it leads to huge difficulty. Please note, there was no public inquest, even though many British citizens were affected. The city council was asked to hold a public enquiry by the Council of Sikh Gurdwaras, the Indian Workers’ Association, Handsworth and Rookery Road Traders’ Association, the South Asian Alliance and Copthall Road Residents, among others. It is fair to say they won’t. It is simply easier not to. On a night when over 500 police officers took to the streets, 644 calls were made to the police, 271 crimes were reported, at least 12 guns were fired, and 8 attempted murders took place [BBC figures] it seems the media found it very difficult to hold a serious discussion for more than a couple of days. Never in Britain has there been violence of such scale between different ethnic groups inhabiting the same geographical space.

Do you look at the documentary now and see things could have done better?

The documentary was an individual effort at an analysis. With more support it could be aesthetically more pleasing but it serves it primary objective well – that is to create meaningful discussion. 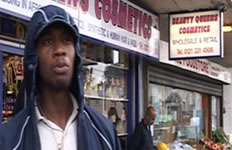 Did you encounter a wall of silence in getting people to appear on camera for ‘Beauty Queen’?

Many possible contributors shut-up shop as they felt the media had painted an unfair picture of the events and saw me as one of them. For others, it was more convenient to stick their head in the sand than take questions alluding to the role they played in the disturbances.

In addition, since the completion of the documentary I have met many people who would like to contribute and would have given the work a different mood. For instance, the many very noble community activists who worked hard on the night of the disturbances to ensure the violence did not grow.

The screening of Beauty Queen was scheduled for a few months ago at the Midland Arts Centre. Why was it pulled? Was there worry it could incite trouble?

It was pulled because an investigation was taking place at the crown courts and the prosecution were concerned a screening could lead to a mistrial. I watched the film with three members of West Midlands Police to see if it was passable but they kindly advised to hold off on a screening.

What kind of reaction have you had to the documentary from audiences? Has it been largely positive?

So far the reaction has been positive. It was important something emerged from the disturbances in terms of analysis. Yet it is important to note my documentary is not a definitive statement on the disturbances. If it is regarded as such would be a huge failing on the part of an audience. I like to think it shines a little torch on a region of Britain which is rarely given coverage.

‘Beauty Queen’ – Tuesday 16 October 8pm
This special screening will be introduced by Billy Dosanjh and followed by a discussion focussing on issues raised in the documentary.
For more information and to purchase tickets contact the Ticket Office on 0121 440 3838 or visit www.macarts.co.uk