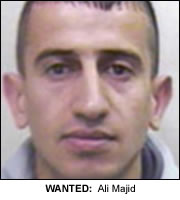 A MAN wanted in connection with the rape of a Birmingham woman in 2006 has been added to the West Midlands Police “Wanted” website.
Ali Majid, 21, has evaded capture since the incident in Birmingham city centre in July 2006 and police have now added him onto their Wanted list.
Police want to speak to him about a sexual assault on a 29-year-old woman in July 2006 in Dale End.

Once out of view, the woman was held down by one of the men and raped by the other man. The two men then fled scene.

Anyone with information is urged to ring 0845 113 5000 and ask to speak to detectives at Steelhouse Lane police station in Birmingham.

Alternatively, information can be left on the Crimestoppers hotline by ringing 0800 555111.