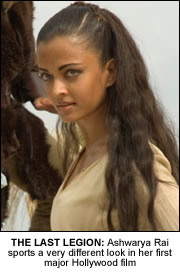 ASHWARYA Rai’s epic ancient history drama is set to get a UK theatrical release in October.
‘The Last Legion’ which stars Colin Firth and Ben Kingsley, will be released by Momentum Pictures on 19 October across the UK and Ireland.
Rai plays Mira, a Kalaripayatu expert from Kerala who has a joined a band of fighters set to protect the life of a young Romulus Augustus – the last Ceasar.
The film, which was expected to be Ash’s big move into Hollywood, was released in America last month but failed to make a serious impact.
The studio, the Weinstein Company, pulled out of press screenings for the film before its release and Rai cancelled her single media appearance in the States in promoting the film.
But for true Rai fans the film will see their beloved star in an entirely different role. Dressed as a warrior and perfecting high-paced action stunts, Rai proves there is more to her than the Bollywood simpleton
Related Links
The Last Legion – Picture Gallery