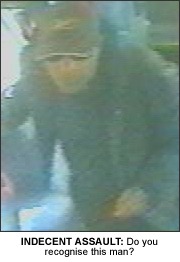 POLICE in Birmingham have appealed for witnesses to come forward after a 19-year-old woman was indecently assaulted on a Birmingham bus.
The woman was travelling on a bus on the Alcester Road in Moseley on Tuesday July 17 when she was assaulted by the man.
He fled the bus when she shouted out.
Detectives have now released CCTV footage of the man in the hope witnesses will come forward.
The man is described as Asian, in his 50s, around 5ft 8in tall, and he was wearing a blue fleece jacket and sunglasses. The offender was also wearing a distinctive gold ring on his right hand, which featured a marble effect oval stone.