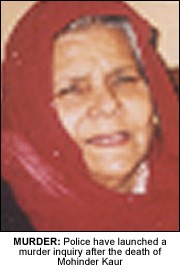 DETECTIVES investigating the murder of a grandmother in her home have revealed she was suffocated.
The mother-of-five was discovered in her top floor flat in Nutgrove Close, Kings Heath on Saturday.
Police forced entry to the premises after worried relatives called 999 when they could not reach her.
Investigations into the death are ongoing and police are in the process of conducting detailed forensic examinations and house to house enquiries.
Police believe the victim was last seen alive in the early evening of Thursday 23 August.
Supt Carl Foulkes, from West Midlands Police, said: “This was a frail, elderly lady and it has come as a significant shock to the family. She was well known to local residents who saw her regularly.”
Police are appealing for anyone who was in the Nutgrove Close or Middleton Road that evening and who saw Mohinder to contact 0845 113 5000 and ask to speak to officers from the MIU, or call Crimestoppers on 0800 555 111.