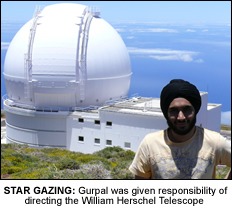 A COVENTRY student has become the envy of all star gazers after he was hand picked to control one of Europe’s largest optical telescopes.
Twenty-one-year-old Gurpal Dosanjh was given the responsibility of directing the gaze of the William Herschel Telescope as part of the University of Warwick’s ‘Undergraduate Research Scholarship Scheme’.
The Physics student, who has just finished his third year at the University, jetted off to the Canary Islands with university professor Tom Marsh to study binary star systems.
Speaking to the Asian Today, Gurpal said he never expected to beat his fellow students to the scholarship scheme.
“I was very happy when I found out that I had been selected for the project, there were a lot more people interested as well so I wasn’t sure beforehand if I would be selected so it was a surprise when I was.
Despite only being an undergraduate student, rather than a research student, Gurpal was in charge of directing the telescope operators to point the huge mechanism at the key accreting binary star systems that Professor Marsh had selected for further study.
Despite the huge responsibility, Gurpal said he was confident he would not make any mistakes.
“Obviously I didn’t want to make any big mistakes but with the preparation work I had done beforehand I was confident when I was there that the telescope would be pointed the right way,” he said.
Gurpal’s visit to the Canary Islands was part of the University of Warwick’s “Undergraduate Research Scholarship Scheme” which is designed to give undergraduate students an insight into research work and help them develop transferable skills.