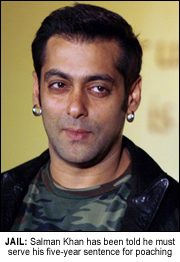 BOLLYWOOD actor Salman Khan has been told he must serve his five-year jail sentence handed down to him for poaching.
The actor, who had asked the court to quash the sentence issued in April 2006 for hunting a protected gazelle on a trip to Rajasthan in 1998, must surrender immediately to the police, court officials said.
The news comes as another blow to the Indian film industry after the sentencing of Sanjay Dutt earlier this month for his part in the 1993 Mumbai bombings.
Khan’s lawyers told reporters that the actor would appeal against the sentence in a higher court.
The case isn’t the only poaching charge the actor has to his name.
He was sentenced by the same court in February last year to one year for killing two protected black buck antelopes during a separate hunting trip in 1998.
And the actor is still waiting to face trial in Mumbai in a 2002 hit-and-run case.
One person died and three others injured when Khan allegedly drove into a group of homeless people sleeping on a pavement.
Khan faces 10 charges, including causing death by negligent driving which carries two years in prison. He has pleaded not guilty on all counts.