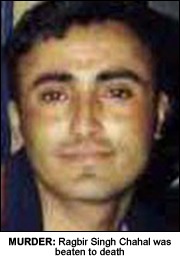 THE CONSERVATIVE Party have outlined new proposals to tackle forced marriages.
The proposals include a requirement for spouses to register the name of their potential husband or wife before going abroad, as well as the requirement for those wishing to enter the UK to take the ‘Life in the UK’ test before they are granted a visa.
The Forced Marriage Unit currently tackles on average about 300 cases a year, but ministers believe many more cases go unreported.
Shadow Immigration Minister, Damian Green said “more effective action” was needed to tackle the practice.
“The continuing existence of forced marriages in modern Britain is a stain on our social fabric”, he said.
“It is the extreme and unacceptable end of the clash of values between a plural democracy which values individual human rights and belief systems that regard women as second class citizens. Shockingly, forced marriages are not isolated events.

“The Government’s Forced Marriage Unit does some good work but more effective action is needed. The Conservative Party has a number of proposals which we are putting out to consultation this week to minimise the incidence of forced marriage.

“Our aim is that all those who come here to live will participate fully in British society, and that British society will be confident enough to allow diversity, as it always has, without losing its central values. One of those values is individual freedom over the key decisions in our lives. Choosing who to marry is one of those decisions, so there is no place in Britain for forced marriage.”
Mr Green added the proposals would help safeguard South Asian women both in this country and those being brought over from another country.
He said proposals to introduce a time requirement before those who have been previously married to a spouse from overseas are allowed to bring in another spouse from overseas.
He said: “This two year probationary period is being exploited by some men who come here on a spousal visa. After being granted indefinite leave to remain, they leave their British spouse. They then act as the UK sponsor in order to bring over a new wife.
“There is also strong anecdotal evidence that men are bringing over wives from the Indian sub-continent, and then leaving them within a few years. They then bring over another spouse from the sub-continent.  This would help to prevent fraudulent marriages, and mistreatment of young wives.”
The Conservatives will be forwarding a number of proposals for consultation this week.