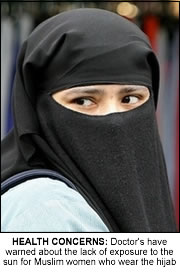 DOCTORS have warned Muslim women wearing the hijab they may be prone to serious illness because they do not get enough sun.
The warning relates to the skin’s exposure to the sun and the lack of vitamin D as a result.
Doctors said an high number of Muslim women who wear the hijab are suffering bone deficiencies over a lack of vitamin D.
As a result of the warning the National Health Service is launching a campaign aimed at predominantly Pakistani, Bangladeshi and Somalian women encouraging them to increase their vitamin D intake.
A Department of Health spokesman said: “For ethnic groups there is an increased risk of vitamin D deficiency as people with dark and pigmented skin are less efficient at making vitamin D in their skin.
“They need to spend longer outside to make similar amounts and those who wear concealing clothing are unlikely to make enough.
“Studies have shown low vitamin D levels in Asian women in the UK – particularly among those who cover most of their skin for cultural reasons.”
There are also fears for Muslim children after studies revealed they too were lacking in vitamin D.
The government has called on the Muslim community to acknowledge the dangers of a lack of sunlight.
An official said: “We are not interfering in a Muslim woman’s right to wear the hijab, but we are stressing that we all need sunlight on our skins. If you have your head and skin covered, then you risk stopping these natural rays from topping up vital vitamins.”