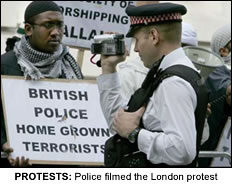 A BIRMINGHAM man has been jailed for six years for soliciting murder during a protest in London against cartoons satirising the Prophet Mohammed.
Twenty-seven-year-old Umran Javed, of Washwood Heath Road, Washwood Heath, Birmingham, was jailed at the Old Bailey. He was jailed for six years for soliciting murder and three years concurrently for stirring up race hate.
Two other men – Mizanur Rahman, 24, and Abdul Muhid, 25, were also jailed for six years for their part in the demonstration.
Another man, Abdul Saleem, 32, was cleared of soliciting murder at his trial but convicted of inciting race hate. He was jailed for four years.
Hundreds of British Muslims demonstrated last February in Central London following the publication of cartoons in a Danish newspaper satirising the Prophet Mohammed.
The Old Bailey was told Javed was filmed by police shouting: “Bomb, bomb Denmark. Bomb, bomb USA.” It was said he was one of the main leaders of the protest.
Rahman, of Palmers Green, north London, was filmed calling for soldiers to be brought back from Iraq in body bags, while Muhid, of Whitechapel, east London was seen leading a crowd in chanting “Bomb, bomb the UK”, and having placards calling for annihilation.
Saleem, of Mellish Street, Poplar, east London was heard to chant “7/7 on its way” and “Europe you will pay with your blood”.
Sir Ken Macdonald QC, Director of Public Prosecutions said: “Freedom of speech is the right of any individuals in our democracy. However, when we examined the content of speeches by Mizanur Rahman, Abdul Saleem, Umran Javed and Abdul Muhid it was explicit that there was a direct encouragement to those present to commit acts of murder.”
He said the law “says you can express your opinions robustly without the fear of being brought before a criminal court”, but it cannot be ignored if “you march down the streets of London calling for people to be beheaded and for European cities to be bombed”.