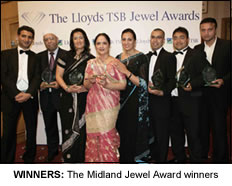 The prestigious event, now in its fifth year, was held on Saturday at the NEC, Hilton and played host to the cream of the Asian community from in and around the region.
The awards are held to celebrate the huge impact of British Asians in both the public and private sector and will reinforce Central England’s reputation as a hub of the UK’s Asian economy.
Estimates are that over 200,000 Asian firms exist in the UK, many of which are based in the Midlands and across Central England.