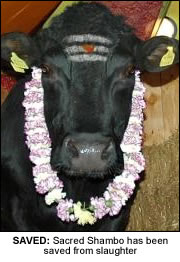 HUNDREDS of British Hindu’s who campaigned to save a bull scheduled for slaughter after testing positive for TB are rejoicing today after a High Court judge branded the government order “unlawful”.
The bull, named Shambo, had faced an uncertain future after testing positive for TB in a routine check in April.
The Welsh Assembly Government said it had no other choice but to slaughter the bull to eliminate the risk of the disease spreading. In doing so they issued slaughter notices for 3 May and 3 July. But the decision brought condemnation from Hindu monks at the multi-faith Skanda Vale community in Carmarthenshire, Wales where Shambo lives claiming it was against the Hindu religion to slaughter the bull.
They appealed against the decision, hired a lawyer and their resilience brought almost 20,000 supporters who signed an online petition against the slaughter.
And their case was backed by a High Court Judge who saved Shambo from the death penalty.
The judge, Mr Justice Hickinbottom, said: “This judgment does not, of course, guarantee that, as the community wish, Shambo will live until he dies a natural death.
“This judgment merely rules that the decisions of 3 May and 3 July to issue the slaughter notice and to pursue the slaughter under that notice were unlawful and will be quashed.”
The assembly government, he added, “have adopted the wrong approach in this case” and would now have to reconsider the matter.
“They will be obliged to reconsider the public health objectives that underlie behind the surveillance and slaughter policy, and come to a view as to whether, in the reasonable pursuit of those objectives, the slaughter of this animal (or some less intrusive measure) would be proportional given the serious infringement of the community’s rights under Article 9 that slaughter would involve.”
The judgement came after lawyers for both parties appeared at a hearing last week.
David Anderson QC, representing the Skanda Vale community argued that Shambo was an animal of “considerable religious importance” and that slaughtering the six-year-old black Friesian would be “a desecration of the temple”.
The Welsh Assembly Government had argued that the slaughter decision had been taken on health grounds after consultation with chief veterinary officer and the chief medical officer. They have not commented on the latest development but are expected to release a statement shortly.
A spokesperson for Skanda Vale said they were “absolutely delighted” at the judges decision.
“We don’t know what it’s going to mean in future but we want to thank everyone who has been so supportive and who has prayed for us”, the spokesperson said.
“We are very happy that the judge has decided to protect the sanctity of life.”
The decision was also welcomed by the Hindu Forum of Britain who campaigned to save Shambo.
Ramesh Kallidai Secretary General of the Hindu Forum of Britain said: “This is a historic judgment…A key criticism of the earlier decision to slaughter Shambo had been the subjectivity, and hence unreliability, of the test. This is a landmark judgment in the history of religious worship in the UK.”
Related Articles:
Hindu’s fight slaughter of ‘holy bull’