Home News Not in the name of Islam 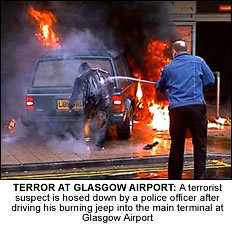 BRITISH MUSLIMS have condemned the recent failed bomb attacks in London and Glasgow saying those responsible are enemies to all Muslims.
The country was put on high alert following the discovery of two cars in the early hours of Friday 29 June.
The first car, a Mercedes containing petrol, gas cylinders and nails, failed to explode in central London.
The second car, also a Mercedes, was towed to a compound where it was later found to contain a similar device.
Less than 24 hours later a burning car loaded with gas cylinders crashed at the main terminal of Glasgow airport.
Two men were arrested at the scene, one with severe burns.
A total of seven people have been arrested in connection with the failed attacks – shockingly all linked to the NHS
British Muslims across the country united in denouncing the attacks urging anyone with information to help the police.
In Birmingham, 250 of the city’s Mosques spoke out against the attacks.
Birmingham MP Khalid Mahmood told the Houses of Commons Mosque leaders in the city were appalled at the events.
“There were more than 250 mosques and 5,000 people and all of them unreservedly condemned this absolutely barbaric act”, he said.
The Muslim Council of Britain were equally condemning in their response to the attacks.
MCB Secretary-General Dr Muhammad Abdul Bari said those behind the failed attacks were “enemies” to Muslims and non-Muslims.
“It looks sadly as if the terror threat currently facing our country will be with us for some time to come”, he said.
“So let us be absolutely clear about this: those who seek to deliberately kill or maim innocent people are the enemies of all of us.
“There is no cause whatsoever that could possibly justify such barbarity. Those who engage in such murderous actions and those that provide support for them are the enemies of all, Muslims and non-Muslims, and they stand against our shared values in the UK.”
He also said they had also failed to divide the nation.
“It cannot be stressed enough that terrorists actively seek to divide us and to undermine our collective strength. To be successful in our collective effort to deal with the threats of terror it is imperative that we all work together.
“We need to have confidence and mutual trust in each other. The challenges facing us as a nation require us to work together for the joint benefit of all.”
As Britain took in the enormity of the latest threat to the country new PM Gordon Brown announced an immediate review of NHS recruitment after it emerged all those arrested in connection with the attacks were linked to the NHS.
Of those arrested was Dr Mohammed Asha, a Midlands doctor who was arrested along with his wife on the M6 near Sandbach, Cheshire.
He worked as a junior physician at the Royal Shrewsbury Hospital and the Princess Royal Hospital in Telford.
As news of his arrest filtered through the international media his family came to his defence saying he had never shown extremist tendencies.
Some reports had suggested Mr Asha was also a student at Birmingham University – a claim the education institute strongly denied.
Meanwhile Prime Minister Gordon Brown has told Cabinet Ministers not to mention the words ‘Muslim’ and ‘terrorism’ in the same sentence.
The move came after the European Commission issued a guide for government spokesmen to adhere to as not to cause offence to Muslim communities.
The guide said the government could avoid offence by ruling out the words such as “jihad”, “Islamic” or “fundamentalist” in statements about terrorist attacks.
The EU is determined to take front-line action in the fight against terrorism. It also announced plans to set up a network of bomb disposal units to share intelligence.