Home News Save our Sheesha 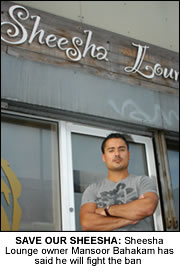 THE OWNER of one of Birmingham’s busiest Sheesha cafes is facing an uncertain future following the launch of the nationwide smoking ban this month.
Mansoor Bahakam owner of the popular Sheesha Lounge in the Moseley area of the city admits he may be forced to close his business as the country gets to grips with the nationwide ban on smoking in public places.
Like a majority of sheesha cafe’s across the country, Mansoor’s main income from the cafe is through the fruit-flavoured water pipe and has admitted it will take a miracle for his business to survive.
But speaking to the Asian Today, Mansoor said he was determined to fight the ban and keep the sheesha tradition alive.
“The ban is out of order, and it’s upsetting to think that a number of sheesha cafe’s across the city will be forced to close”, he said.
“About 80 per cent of my business is made up from people smoking sheesha so without that I cannot see my business surviving.”
Mansoor has enjoyed being at the helm of one of Birmingham’s most well known sheesha cafes over the past two and a half years.
He says the cafe enjoys a diverse selection of clientele who have all expressed their dismay at the ban.
“We have such a wide range of people coming to Sheesha Lounge – from London, Manchester and Leicester”, he said.
“Sheesha has become so big in the UK that you don’t just see Asian people smoking the pipes these days. People from different cultures and backgrounds all enjoy sheesha which is why it’s such a shame that the ban will force many to close.”
He said many of the city’s sheesha cafe owners had joined forces to try and fight the ban.
“We have had meetings about the issue and discussed how we can move forward”, he said.
“We had one meeting with a representative from the Department of Health and explained that although sheesha cafe’s were public places, it is advertised as a smoking business which would never be visited by a non-smoker.”
He added: “We’ve had a look at the law to see if there is anything that we can do.
“We’ve spoken to a number of MP’s about our position and to voice our concerns.
“If we are forced to close the government will be wiping out a tradition which a cross-section of people enjoy.
“We won’t give up”.
But doctor’s writing in the British Medical Journal said the ban on hookah’s had to stay in place.
A spokesperson for Birmingham City Council told The Asian Today government legislation on smoking in public places did include sheesha and they would continue to enforce the ban on the popular arabic tradition.
Do you think the government are wrong to include Sheesha Cafe’s in the smoking ban? Or do you believe smoking Sheesha is the same as smoking cigarettes and should not be exempt from the ban?
E-mail your views to zakia@urbanmedialtd.com