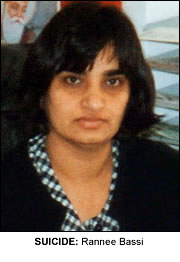 A MAN has blamed a wrongful fraud investigation for the death of his wife who committed suicide.
Mother-of-three Rannee Bassi hanged herself in her office following a four-year probe into allegations that she fraudently claimed hundreds of thousands of pounds in legal aid for invented clients.
The 50-year-old, who lived in Birmingham, had maintained her innocence and eventually the Legal Services Commission, who headed the probe, cleared her company Bassi Solicitors of any wrongdoing.
But Mrs Bassi’s husband Manga Powar said the investigation had caused his wife great distress.
‘My wife was a very respected lawyer. She helped many people in ethnic minority communities who felt they had no voice”, he said.
‘But word somehow got out that we were being investigated for fraud. Rannee felt the firm had been tarred with a brush and that clients and other professionals were treating her differently.
‘She was mortified. She did everything she could to prove that these people existed, but then the commission suddenly switched the focus of the investigation to say she was claiming for more hours than she was working.”
Mrs Bassi went to great lengths to prove she had not committed fraud, even producing witness statements from doctors and immigration officials that clients questioned by the Legal Services Commission did exist.
On May 29 this year Mrs Bassi left her three children and husband at their Birmingham home and went to her offices were she hanged herself.
She was found the next morning by her husband who thought she had spent the night at her mothers.
“The investigation was the start and end of everything”, Mr Powar said.
“Rannee loved her children very, very much but she was just tipped over the edge by the stress of being portrayed as corrupt.”