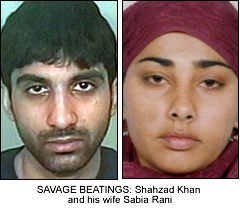 FOUR members of the same family will appear in court next week charged with the murder of a Pakistani girl who was beaten to death by her husband.
19-year-old Sabia Rani was beaten to death by her husband, Shahzad Khan just months after she came to the UK following an arranged marriage.
He was sentenced to 15 years in jail at Leeds Crown Court in January for the murder.
Police confirmed today that they had also charged four other members of Khan’s family with familial homicide.
Phullan Bibi, 51, Majid and Nazia Hussain, both 28, and Uzma Noreen Khan, 22, will appear in court on Monday.
The Crown Prosecution Service said they were accused of causing or allowing the death of a vulnerable adult.