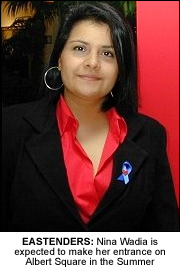 COMEDIAN Nina Wadia is set to appear in top BBC soap Eastenders.
The Goodness Gracious Me comedian will form part of a new two-member Muslim family set to be introduced to Albert Square this Summer, according to a report by the Sunday Mirror.
She will play Zainab Masood who owns a string of post offices including the one in Walford and will live with her daughter Shabnam, played by newcomer Zahra Ahmadi.
The family will be the first Asian faces on the square since the demise of the Ferreira family who were dumped from the square in Spring 2005.
Insiders at the soap have revealed Zainab will ruffle a few feathers in Walford and will come head to head with newlywed Denise Fox who currently runs the post office.
A source told the Sunday Mirror yesterday: “The Masoods are going to put noses out of joint. Zainab is Walford’s answer to Sir Alan Sugar – she’s not there to make friends. Shabnam will put the cat among the pigeons too.”

“Her direct manner can be hugely intimidating and sparks will fly with Denise [Wicks]. Underneath her fierce manner, however, Zainab is great fun and has a wicked sense of humour.”

Nina Wadia said she was “thrilled” to be joining the show, adding: “I can’t wait for Zainab to come to the Square and cause some trouble.”

Her on-screen daughter Shabnam, played by Zahra Ahmadi, is a university graduate
Zahra Ahmadi said: “I’ve watched EastEnders as long as I can remember and I’m really excited to be joining the cast. It was very surreal walking into the Square and seeing all the face I’d grown up watching. I felt like I knew them.”

He added: “Newcomer Zahra is a real find. She’s warm and great fun. I’m confident the Masoods will be a big hit with viewers.”