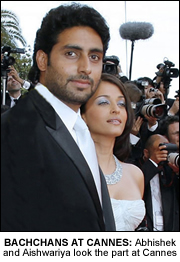 BOLLYWOOD couple of the year Aishwariya Rai and Abhishek Bachchan stepped out for the first time since their high-profile wedding last month on the red carpet of the Cannes Film Festival.
Looking radiant in a flowing white gown, Aishwariya took husband Abhishek to the high-profile film event of the year as part of her duties with cosmetics giant L’Oreal.
The couple attended the premiere of Wong Kar-wai’s “My Blueberry Nights” and looked every inch the glamorous couple which have made them star-studded celebrities in India.
The visit was Abhishek’s first outing to the French Riviera resort and may well have been prepped beforehand by his wife who has been a regular at Cannes since 2003 when she walked the infamous red carpet for her Bollywood period drama Devdas.
But all talk was about the couple’s recent marriage with Ash admitting she was getting used to being called Mrs Bachchan.
“This is the first travel where people start calling you, `Hello Mrs. Bachchan, good evening,'” she said.
“I’ve maybe done a double take at times, but pleasantly so, it makes us smile, so it’s been good.”
The duo were back on the red carpet for the second time during their visit, this time to watch Mani Ratnam’s hit Guru which was screened in the Tous les Cinemas du Monde strand as part of a special focus on Indian cinema.
And they weren’t the only Bollywood stars to make it to Cannes.
Preity Zinta was snapped on opening night who is at the festival to promote jeweller Chopard.
Bipasha Basu is also expected to attend to promote Goal as well as Amitabh Bachchan who is not at Cannes to keep an eye on the newlyweds, more so to promote Cheeni Kum which is being screened in the Cannes Film Market.
The Bachchans’ at Cannes – Click here for Picture Gallery