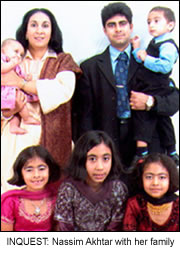 A HEAD teacher committed suicide whilst under investigation for bullying, an inquest has heard.
Mother-of-five Nassim Akhtar, from Manchester, was found dead in the back of her burnt-out car two months after she was suspended from Cheetwood Community Primary School in Cheetham Hill.
She was told not to return to the school until the investigation into allegations of bullying and using inappropriate language was conducted.
Family members had said she was planning an appeal against her suspension but had not initially told them of her suspension.
Blackburn Coroner’s Court heard from Mrs Akhtar’s brother, Mohammed Rafique, who said his sister had told the family she was not attending work because she was poorly.
He added: “She never talked about work to me because she did not want to get me involved. But she did say she might get sacked.

“I know she was on the phone a lot to her union representative.

“It definitely affected her well-being and she stopped going out of the house.”
He said the investigation was the only worry his sister had.
On 4 January this year, Mrs Akhtar left her home in Mayville Road, in Brierfield, near Nelson, after telling her husband, Jameel, 27, to collect the couple’s five children from school.
She was found dead later that day by firefighters who were called to a secluded farm track in Altham after a passing motorist had spotted Mrs Akhtar’s burnt-out car.
A fire investigation carried out by Lancashire Fire and Rescue Service concluded that Mrs Akhtar had deliberately set fire to herself and had chosen not to escape from the burning car.
Coroner Michael Singleton recorded a verdict of suicide. He said Mrs Akhtar had doused herself in paraffin and then set herself alight and that she had subsequently died from a combination of the inhalation of the products of combustion and extensive burns to her body.
Mrs Akhtar’s family declined to comment after the hearing.