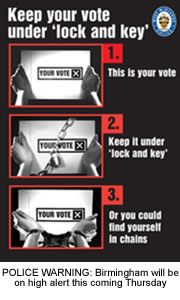 WEST Midlands Police have launched a campaign advising the community to keep their vote in the upcoming elections ‘under lock and key’ – or risk finding themselves in chains.
A series of posters and leaflets have been produced highlighting how voters should be looking after their vote – and the consequences of what could happen if they don’t.
As part of the campaign a voter is shown securing his vote ‘step-by-step’. As the steps continue the emphasis moves towards what will happen if you do not look after your vote. The message is clear – lock away your vote or you could find yourself locked up.
The leaflets are being distributed within the community in the run up to the local election.
Birmingham is one of many cities which will be under a watchful eye after widespread election fraud gripped the city last year.
Police are hoping to avoid the same this year and have launched the campaign in time for the May 4th elections.
A number of officers will be working closely with partner agencies throughout the region to advise on and help prevent election fraud. During this time West Midlands Police are asking the community to work with them. to help prevent election fraud.
Assistant Chief Constable David Shaw, from West Midlands Police, is the ACPO lead for election fraud. He said: “West Midlands Police are committed to ensuring democracy and we will be working closely with our partners to ensure this is the case.
“There is little evidence of fraud on a major scale but as always, by promoting best practice and learning from previous experiences, we can reduce the opportunity from occurring. We are keen to educate the community on how to look after their vote but also to warn them of the consequences of committing election fraud.”