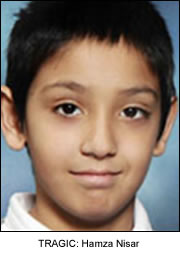 A 10-YEAR-OLD schoolboy from Bradford has been shot dead whilst on holiday in Pakistan with his family.
Hamza Nisar was fatally shot in the chest as he left his grandfathers house to go to the local Mosque in the Mirpur region of the country.
He was rushed to the local hospital but tragically died after the incident last Friday.
It is believed a man has been arrested by local police in connection with the youngster’s murder.
Hamza was in Pakistan with his family as part of a three-week holiday.
The family’s local MP Marsha Singh said he had spoken to Hamza’s distressed family and would be writing to Foreign Secretary Margaret Beckett to make sure “justice is done”.
He said: “It’s a great tragedy in which a young boy, 10-years-old, was on holiday over Easter with his parents and he was shot dead outside his house.
“The family are obviously traumatised and shocked.
“Any murder is a tragedy but when a young child is involved, the feelings are even stronger.”
“I am writing to Foreign Secretary Margaret Beckett to ensure that the British High Commission gives all the necessary support to the family and liaises with the Pakistani authorities so that justice is done,” he added.
Hamza’s parents, Nighat and Nisar Ahmed are still in Pakistan. His cousin Taslim Sadiq told the Telegraph & Argus newspaper he had spoken to the youngster’s father who was “distraught”.
Miss Sadiq said: “We have spoken to Hamza’s father and he is distraught. Everyone is blaming themselves for this, but that is no way to live, we have to be strong.
“Hamza was a lovely boy; he was very gentle, very passive and kind.
“He was mad about football and was a very good player, he used to play in tournaments locally. It’s so sad that he will never grow up to live his dreams.”