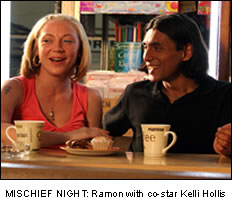 You’ll probably recognise him as leather-clad biker ‘Ferdy’ in the critically acclaimed BBC drama ‘This Life’. But there’s more to Ramon Tikaram which meets the eye, evident none more so than in ‘Mischief Night’, a superbly executed film about life in the north of England. Ramon plays ‘Immie’, a second-generation Muslim living in Beeston – a town divided along racial lines. In the course of one night the individual lives of the inhabitants of Beeston’s multi-cultural make-up come together to bring about one of the year’s brightest British films.
With its DVD release just round the corner we caught up with Ramon to find out what attracted him to the project.
For our readers who haven’t come across the film, in a nutshell what’s ‘Mischief Night’ all about?
‘Mischief Night’ is a fast paced black comedy which traces the week leading up to mischief night itself and follows the lives of two families: the Crabtrees and the Khans. (Nutshell).
Tina Crabtree is mother to three children. Tyler is a 16 year old lad hoping to follow in the footsteps of his gangster grandfather. Kimberley is a twelve year old girl obsessed with learning the identity of her real father. Macauley is her youngest.
Immie Khan is the eldest of many children, most notable of whom are: Asif, a twelve year old renegade who respects very little and Sarina, a fifteen year old, desperate to avoid an imminent arranged marriage. The film starts with the chance reacquaintance of former schoolmates, Tina and Immie.
After Asif is forced to sell heroine as punishment for wrecking the car of local gangster’, Qassim, he is befriended by Kimberley and together they set off to do two things: locate her father (we know he’s Pakistani but that’s it) and execute the above local dealer.
Meanwhile, Immie (ex-con, determined to go straight) is being pressurised by his father, and other Muslim elders, to ‘do something’ about the extremist Imam currently taking over their mosque.
As Immie and Tina’s friendship evolves, Tyler goes into private enterprise, Sarina develops a plan to escape her wedding day and Macauley manages to accumulate quite a fund for mischief night.
Only on mischief night itself do we find out if anybody’s goals are achieved, but one thing I can tell you is that events do conspire to change everybody’s life forever. (Coconutshell). 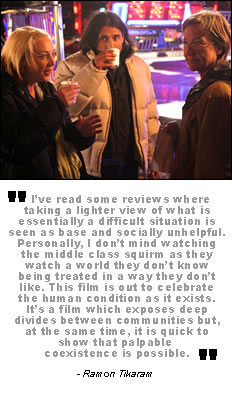 What was it about the film that attracted you to it?
When it takes you only twenty minutes to read a 70 page script then something has to be right. In this instance it was the frenetic pace of the humour and the warmth of the two main characters. I hadn’t read anything so unabashed about the squalor of the world it occupied and it seemed to do so without lingering on its own jokes – everything in it felt so natural and unforced. More than that though, there seemed to be a comprehensible structure to it – something which I have always thought anarchy needed.
You play the character of ‘Immie’ who is living this ‘arranged marriage from hell’ life. Did you find it difficult relating to him?
An “arranged marriage from hell”, hmm. Arranged? Perhaps not. From hell? Well, I think the “hell” that Immie is talking about is that he “can’t talk to ‘er ‘bout owt” – in other words, he’s in a relationship where the lack of cultural common ground means no relationship at all and where the possibility of love therefore seems to have passed him by, which, I imagine, is a hellish place to be. A lot of us have, at one time or another, been in a loveless relationship, so, yes, I could relate to at least that much of Immie’s marriage.
The film was great mix of non-professional and professional actors. How did this work on the set of the film?
In a movie which hopes to replicate the reality of a specific town or area, then non-professionals are essential for authenticity. The professional’s job is to put into his body, the sounds and general mood of the world in which he finds himself, without compromising the integrity of the main action. I think both criteria are fulfilled in “Mischief Night” and, to be honest, I think the distinction between professional and non-professional is invisible. On set itself, the overwhelming sense was of a community telling its own story and so, once again, divisions just didn’t exist.
W.C.Fields once said ‘Never work with children or animals’…were you a bit apprehensive about working with the children in the film?
I’ve never been afraid of children, even when I was one! As a father of three, including two teenagers, I’ve gotten used to their wily ways and actually find the prospect of working with children a lot more interesting than working with certain adults. Qassim (Asif) and Holly (Kimberley) were very feisty, colourful characters but they were also damn good at their jobs. Glad to have worked with them.
The film paints a grim picture of contemporary Britain yet it’s not done in an overtly negative way. How much does this contribute to the success of the film?
I’ve read some reviews where taking a lighter view of what is essentially a difficult situation is seen as base and socially unhelpful. Personally, I don’t mind watching the middle class squirm as they watch a world they don’t know being treated in a way they don’t like. This film is out to celebrate the human condition as it exists. It’s a film which exposes deep divides between communities but, at the same time, it is quick to show that palpable coexistence is possible.
Although Penny Woolcock is responsible for writing this brilliant script, many of the events depicted in it, are drawn from genuine research. The world she has drawn from is harsh, but it does manage to operate on a current of humour, and so would actually be very difficult (if not downright disingenuous) to express in an overtly negative way. As to whether the film is a “success” or not, you tell me. 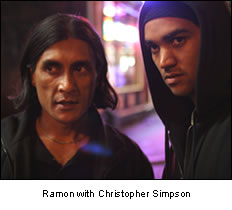 Were you weary at all of all the gritty subject matters (religious extremism, racial divides, drug abuse etc) honed into one film?
There are a lot of “gritty” topics in this one and I think the fact of their being “honed” into one film is a rather tactical one – you have to watch the film twice to get it all! Joking aside, I thought the pace of the film and the frenetic unravelling of events lent itself to the bottlenecking of “issues”, if only to parallel the spiralling loss of control that our narrator, poor Tina, has to go through. I think they call this mimesis within mimesis…no they don’t, I’m just being stupid. Sorry. Was I wary? No, just feeling mischievous at the prospect.
What do you hope audiences will take from Mischief Nights?
People will have watched the film and, to some degree, they will be disconcerted by what they have seen, but I hope the films’ themes of personal morality and optimism in the face of adversity will find some resonance. I also hope the film is successful at showing how fundamentally similar people are, regardless of the differences they may care to attach themselves to.
Finally what have you got planned for the rest of the year?
The rest of the year will be largely taken up by a 26 part children’s drama in which I will be playing an ambitious career teacher with a penchant for mindgames – unluckily for him, they tend to backfire. And guess what? It films in Leeds!
‘Mischief Nights’ is available to buy on DVD on 23 April 2007
Win a copy of Mischief Night on DVD!