Home Interviews In a Class of his own

New star looks to break into the industry 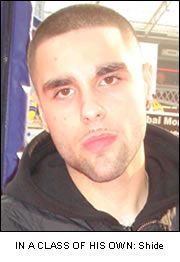 He’s a 19-year-old up and coming star from Nottingham and from what we hear of him on the debut album from 2NV, there’s no mistaking Shide, aka ‘1st Class’ is one youngster who’s here to stay. A talented R&B singer, writer, rapper and MC, Shide hails from a mixed English and Pakistani background which allows him to venture beyond just a single cultural boundary. This is evident in his offering on producer-come-singer 2NV’s debut album ‘Point Proven’ which is already making waves on the Bhangra music circuit.
But who is Shide and what makes this youngster tick? We caught up with him to find out…
To start with Shide, tell us a bit about yourself

Well I’m 19 from Nottingham, I’m a singer/song writer and been writing for a few years now. I can rap as well as sing R&B and currently I’m signed to 2nv Entertainment and will be working on various projects with them.
What was the attraction of the music industry for you?

I have always been a bit of a performer for a long time going back to my younger days, I loved music and singing and it was a dream for me to be able to one day have my music being played on the radio and people appreciate it.
You sing, write and rap – do you prefer any particular one?

I always love writing whenever I am happy or sad or even angry, I love putting emotions onto paper and then creating something for someone somewhere to relate to. I do love rap – it’s where I am most relaxed and when I perform on stage it gets the crowd going. At the same time I am pretty relaxed when it comes to singing R&B songs. God this is a tough question to answer I guess I don’t mind whatever I do it depends all on my mood really!

How much do you think the music industry helps up and coming artists like yourself?

It depends really, I do believe you have to be in the right place at the right time, the Asian industry is on the decline and there is not a lot of help available for up and coming artists. Unless you’ve been around for a while, even now particular radio stations have yet to play the music off the album, this could be due to a number of reasons but it’s just the way it is. The mainstream music scene is where the ultimate goal is and that’s where I see myself going. That’s what I want to do and I hope that’s where my dream with 2NV takes me.

You feature on 2NV’s debut album ‘Point Proven’. How did you find this experience?

It was amazing experience. I was first introduced to the guys a while ago after they had heard about me from someone else. Tas got in contact with me and said I have a record label and a producer called Amaan who would like to meet you. I met the guys and they played me some beats and instantly I began to rap/rhyme over one of the tracks. The experience taught me a lot; they believed in me and gave me 100% control of how I wanted it to sound even though I had a small part to play. It was like I was the star on the album, it was a worthwhile experience working with people who are on your wavelength and can picture your vision and believe in you.

What are your expectations of the album? Are you hoping it will lead to further projects?

My expectations are that I hope it does well; it’s not a mainstream Bhangra album so I hope it appeals to a lot more people out there. As far as the offers go, I have had a few people approach me and I am looking at all opportunities. Once the summer Mela’s start I think a lot more people will know who ‘1st Class’ is, till then it’s a case of we will call you and let you know and that’s something you have to put up with. I have started to write a few tracks for the next 2NV album that I think will be out later in the year. I’m not sure of the exact dates but all I can say to the readers is watch this space guys and girls!

Finally, what projects have you got lined up for 2007?

Well I have my own album which will be out later this year if all goes well. I shall also be working on Daler Masti’s album where I may feature on two of the songs off his album, and as I mentioned earlier I shall be working on 2NV’s next project also.