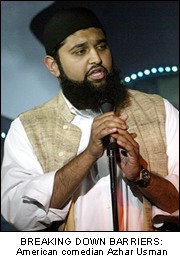 American comedian Azhar Usman is seen as somewhat of a fresh face in today’s Islam-fearing universe….he turns fear into funny. The bearded American Muslim has been a hit on the worldwide comedy circuit since early 2001 when he burst onto stage proclaiming “Yes, I am a Muslim! But I’m an American Muslim. I’m very patriotic! In fact, I would die for this country by blowing myself up!”
With a strict routine that does not include sexual innuendos, cursing and making fun of real people, Azhar bases his sharp and witty comedy on his faith. Wanting to break down stereotypes of his community he firmly believes humour is the best bridge to understanding – and he likes to think its working. Gearing up for his UK ’Allah Made Me Funny’ tour next month where he will play at Birmingham’s Midlands Arts Centre, the Asian Today caught up with Azhar to find out just why a bearded American Muslim is getting all the laughs…
What motivated you to pursue stand up comedy?
It’s like the title of the show says: God made me funny. The raw instinct to make people laugh is natural for some people. I always admired comedians – their honesty in speaking the truth, no matter what. Especially minority comics who did social material. As a kid, I wished that there would be a mainstream comedian who I felt represented my viewpoint and cultural background, just as I saw so many diverse types of comics representing everyone else. But it never happened. And suddenly, as a young adult, I developed a yearning to try standup. I was always very intimidated by it. I could do sketch or improv comedy, no problem. I did a lot of that type of comedy as a kid – even at Muslim camps and youth events, etc. But I was scared of trying standup, because I found the idea of developing written material to be very challenging. Finally, I worked up the courage to try it – after writing jokes for nearly a year – in early 2001. I was hooked. It became a serious hobby almost immediately, and then I unintentionally fell into a career as a professional working comic a couple of years later.
Are you surprised at how much your comedy has been accepted across the West?
I am not surprised per se, but I feel tremendously blessed and humbled nonetheless. I am not surprised for two reasons. First, I believe there are plenty of Westerners who find the very idea of Muslims making them laugh to be a novelty. Once they realize that our show is actually genuinely funny, they appreciate it that much more. Second, I believe that the press has done a fairly good job of reporting on the phenomenon of Western Muslims in comedy – particularly after 9/11 – and this has been a boom for Muslim comedians. Part of the reason the press loves to report on Muslim comedians is because they feel – consciously or unconsciously – that the Muslim comedian represents the precise antidote to the Muslim terrorist. And members of the media are sick of telling stories about stereotypical Muslim terrorists, just as we the public are sick of hearing about them.
What type of reaction do you get from the Muslim community to your comedy routine?
Overwhelmingly positive. For every one negative email or comment I’ve ever received, there have been literally dozens of notes of encouragement and support. Again, it is a very humbling feeling to receive such love and support from your own people, in addition, of course, to the larger, non-Muslim mainstream society, which has also been overwhelmingly supportive and positive.
Have any of your jokes drawn complaints from Muslim communities you play to?
Not as a rule. There are a couple of specific lines, or jokes, or bits that might ruffle the feathers of one or two individuals in a crowd of several hundred people. However, even if they object to anything, chances are it is based on some subjective interpretation of my material – nothing based on an objective argument that shows any of my material to be impermissible or inappropriate as a matter of religious law, theology, or ethics. Naturally, there is a cultural sensibility that is required to understand and sometimes “get” a standup act. I have found that the vast majority of complaints or criticisms that I have received – and again, there have not been that many to begin with – have been based on cultural misunderstanding. The critic often misunderstands or misses the point of the comedy material due to lack of shared cultural information or what is known among academics as “pragmatic competence.” Now there’s a term worth Googling!

At what point do you know not to cross a certain line in any of your routines?
I take my faith seriously, and I try hard to live by the moral, theological, ethical, and legal parameters of orthodox religion. I don’t always measure up, I’m sure, but I try hard and I ask God to forgive my breaches and lapses. I don’t make any exceptions for my comedy material. I try to conform my act to the same parameters by which I live my life. When it comes to my art, that simply means that I draw some lines in the sand that I choose not to cross – things like making fun of God, prophets, religion itself, or any such material that constitutes sacrilege, blasphemy, or even heresy. I pass my comedic ideas through two levels of filtration: permissibility and appropriateness. Only if something passes my permissibility test (i.e., it is not specifically condemnable according to Islamic law or theology), then I consider if the joke would be appropriate for the sensibilities of a given audience. The latter is a far more subjective inquiry, and it depends on the cultural taste and temperament of each audience. For example, I may not do certain jokes or use certain words if I know that there are a lot of children in a given audience, out of respect to their parents who may not find said jokes/words to be appropriate for kids. Ultimately, we are in the realm of art so there are very few black and white cases; mostly it’s all gray area, so we simply try our best to exercise reasonable care and responsible judgment on a show-by-show basis.
You’ve spoken in the past about making sure you have the support of the Muslim community through the work you do. Why is this important to you?
It is extremely important to us for two reasons. First, Allah Made Me Funny, since its inception, has been effectively a community project, and it has now even become almost a community trust of sorts. We have consciously put ourselves out there, made ourselves vulnerable, and spoken out on many issues about which the Muslim community feels but rarely ever speaks. To do this requires a base of support and a network of individuals and organizations who can bring the resources of a community to bear on making such a project successful. Additionally, it is about self-empowerment and taking positive actions to bring about self-critique and self-improvement. It is pointless to expect to achieve this at a community-wide level if there is no community support.
Secondly, to be effective in reaching out to the broader, mainstream society – and to be taken seriously by it – requires authenticity. Every artist struggles to maintain his or her authenticity, to remain loyal to one’s own voice and core values at all costs, with integrity. You can’t fake it. Audiences simply won’t respond favorably. They can feel it. Standup comedy is something very special, I believe, and like all communication it has as much to do with words as it does with human hearts. That is, if a comedian has sold out his or her community in pursuit of fame, wealth, influence, or whatever, it is not only a moral failure, it is commercially unwise. Such a comic will never be able to crossover (or even be taken seriously) by the mainstream if the niche from which she comes refuses to embrace her.
You’re in Britain in April. Do you have to adapt your comedy routine in any way to suit different audiences?
Not really. Of course, in Europe it always helps to bring my self-deprecating American material along. Brits do love to hear Americans making fun of America. Something about it that’s so, I dunno, American.
Some of your subject matters include 9/11 and Guantanamo Bay. Are there any subject matters you would stay clear of?
Not any specific subject matters per se. No specific topic is off limits, as a rule. But again, what matters a lot more to me is the manner in which each subject or topic is addressed and handled. I won’t stay away from political material just because it’s a hot button issue or out of fear of speaking my mind. However, I will try to maintain my commitment to my two levels of filtration and staying within my self-imposed limits, such as avoiding sacrilege, blasphemy, heresy, etc.
Finally, here’s an opportunity to plug the show and tell us why the good people of Britain should make sure they catch the tour in April
In one word: it’s funny. Really, it’s a seriously funny show. (Pun intended.) Perhaps Sir Peter Ustinov said it best: “Comedy is just a funny way of being serious.” We live in a serious world, in a serious time, with serious issues confronting our societies. We could all use some comic relief. Allah Made Me Funny—The Official Muslim Comedy Tour provides just that. If you don’t believe me that it’s actually a funny show, there’s really only one way to find out.
You can catch Azhar Usman on the ‘Allah Made Me Funny’ Tour at Birmingham’s MAC on April 11. Tickets are priced £10 and can be purchased by phoning the MAC Box Office on 0121 440 3838
Interview by Zakia Yousaf