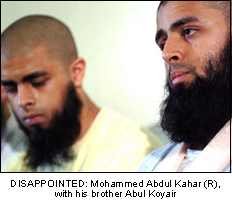 AN INNOCENT British Muslim man shot in the arm during an anti-terrorist raid at his house has slammed a report into the police’s action calling it a “whitewash”.
Mohammed Abdul Kahar was shot in the arm when a policeman’s gun accidentally went off during an anti-terrorist raid on his family home in Forest Gate, east London, last June.
He was detained alongside his brother Abul Koyair, in a failed raid to find chemical weapons.
An Independent Police Complaints Commission (IPCC) report into the botched raid said that although the Met would have to issue a public apology over “very aggressive” tactics it was justified in carrying out the raids and officers involved would not be disciplined.
Mr Kahar, who was detained for several days before being released without charge, hit out at the report telling the Guardian newspaper he would liked to have seen “some people get prosecuted”.
He said: “At the end of the day, a lot of people understand we were innocent families, we were not what they said we were. We have still not had an apology.”
Mr Kahar added all he had ever wanted was an apology from the police and recognition that “we are not terrorists, we are not a violent family”.
“How can they justify saying the intelligence was right? The main criminal is the person who informed them. But they have never let us know who the informant is or what intelligence they had.”
!53 complaints were made to the IPCC following what it called “failed intelligence” by the police searching for a chemical weapon.
Whilst only a few of the complaints were upheld, the IPCC said 11 family members caught up in the raids were subject to a “terrifying experience”.
“Intelligence is not evidence,” said IPCC Commissioner Deborah Glass. “The police need to plan for the failure of intelligence.
“Where as a result of a high profile operation innocent people are injured or publicly branded as terrorists, the police should make an equally high profile public apology.”
“The police should publicly explain the way they assess intelligence in such high-profile cases,” she added.
But the report exonerated any officer from blame in the botched raid saying there were no grounds for prosecution. Only one officer received a written warning over the incident with the IPCC saying it had concluded that the shooting of Mr Kahar was an accident.
Ms Glass added:” I know that some people will feel very strongly that individual officers should be disciplined.
“However, after much thought, I have concluded that the level of force has to be judged in the light of the officers’ beliefs that they were facing an extreme lethal threat not just to themselves but to the public and to the occupants of the houses themselves.”
Responding to the report, Deputy Assistant Commissioner Alf Hitchcock from the Metropolitan Police hinted the force would not be apologising despite the IPCC’s report.
“We have apologised on three previous occasions, to the community for the disruption we caused and specifically for the injury we caused in relation to this, and I reiterate that today,” he said.
“I think we need to move on from apologising over and over again.”