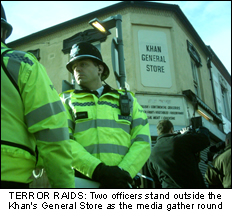 COMMUNITY groups and leaders across Birmingham have appealed for calm after police arrested nine men amid fears of a terror kidnap plot.
More than 12 properties across the Washwood Heath, Sparkhill and Alum Rock area’s of Birmingham were raided in a joint operation between West Midlands Police and the Midlands Counter Terrorism Unit. Nine people were arrested and detained for questioning amid news reports that a British Muslim soldier was the target of a kidnap and execution plot.
Detectives handed out a number of leaflets appealing for calm saying the arrests targeted criminals and not a particular faith or community.
The Saltley Gate Peace Group, an inner-city faith organisation in Birmingham, said it was imperative the community showed “solidarity” and a “united front”.
Saltley Gate Peace Group chair, Adam Yosef, said: “As communities very diverse in their nature, the arrests will come as a great shock to the people of Alum Rock and Sparkhill but we must remain united and work with the police in rooting out any extremism and threats within the community – regardless of race or religion.”
But the arrests have sparked angry protests from the predominantly Muslim communities across the area’s who claim the arrests and subsequent media coverage are likely to cause lasting damage to community relations. 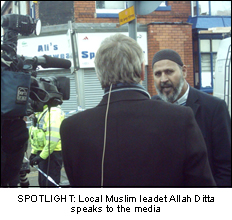 Mr Yosef added: “We must not allow ourselves as citizens of this city to become wrongly targeted or marred by such events.
“It is therefore also in our interest as a community not to become pawns in a political climate of hostility and fear.”
And his comments were echoed by Respect Councillor Salma Yaqoob.
“The damage that’s done when areas are referred to as hotbeds of radicalisation, it does Birmingham no good.
“We have actually an excellent model of cohesion here, quite a lot to be proud of and what’s happening now is the fear is going to be increased, regardless of what facts emerge later, and we’re saying ‘keep the legal process intact;.
She added the intense media scrutiny over the raids could lead to a “trial by media which is the last thing we need in this country.”
Detectives interviewing the nine arrested men have been granted an extension of seven days before the men are either released or charged under the Terrorism Act.
While detectives have not disclosed the identities of those arrested, some newspapers have published names and pictures to the anger of the local community.
At a public meeting held at Birmingham Central Mosque there was anger and resentment at the way the media have handled the raids.
Businessman Tariq Mahmood said: “There is no evidence, that we know of, but pure speculation, statements from the Home Secretary, houses raided and the media frenzy.
“The media will go away, the politics will move on but we all feel the effects of this farce for years to come.”
Former Guantanamo Bay detainee Moazzam Begg who was held at the US camp without charge before being released was also present at the public meeting.
He said: “I hope that when the truth manifests itself that, metaphorically, heads will roll with the people who put out these stories in the first place.”