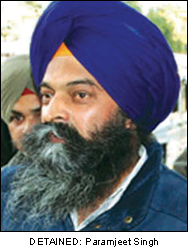 THE FAMILY of a Wolverhampton man detained in India during a family holiday and accused of being a terrorist have begun a campaign to secure his freedom.
54-year-old Paramjeet Singh was due to fly back to the UK on 27 December with his wife Balvinder Kaur, and three-year-old granddaughter following a family holiday when he was arrested by police.
Claims by Indian authorities that a number of explosives and firearms were discovered on land belonging to Mr Singh have been slammed by his family who said the case against the former factory worker was seriously flawed.
Mr Singh’s case is being backed by MP’s Ken Purchase and Rob Marris, chairman of the all-party Parliamentary group for UK Sikhs, as well as a number of Sikh organisations across the UK, including the Sikh Federation, who have begun an internet campaign to highlight Mr Singh’s case.
The father-of-four, who was falsely imprisoned in October 2003 accused of travelling on a false passport, has peacefully campaigned for change and reform in India for a number of years. He pursued his hobby of singing and became an international folk singer under the name of Punjab Singh in the 1980s.
He travelled to India in October last year to furnish and decorate the family home in readiness for a planned trip back to the country this summer with his family.
He was originally due to return back to the UK on 13 December but decided to extend his stay for the wedding of a family friend.
But four days before he was due back in the UK he was arrested, along with two other men, as he made his way back to the family home having attended a religious event with four friends.
Speaking to The Asian Today, Mr Singh’s daughter Ravi Gakhal said her father was stripped naked, tortured by officers and forced to sign a confession implicating him in a crime he had no part in.
Miss Gakhal also said the case against her father was flawed. She said police had initially claimed explosives and firearms were found in the car he was travelling in, but later said they were found on land belonging to Mr Singh. A number of Indian newspapers who have covered the case also quoted Mr Singh’s neighbours as saying the police did not visit Mr Singh’s home until after the arrest and then dug up land belonging to his neighbour to support their claim.
Miss Gakhal said her family were “shocked” and “traumatised” at the arrest and treatment of their father.
“The family are all deeply shocked and traumatised by the events of the last few weeks”, she said.
“What was a happy family holiday for my parents has turned into a total nightmare. My three siblings and I are all professionals who have been born in the UK. To us, it is beyond comprehension that this could ever happen to our family.”
Miss Gakhal said her mother, Balvinder Kaur, left India on 27 December for fear of her safety and since his detention family members have travelled to the country to campaign form Mr Singh’s release.
“My father is said to be in good spirits under the circumstances”. Miss Gakhal added.
“He is hopeful that this terrible mess will all be resolved very quickly. We are looking forward to his safe return home.”
Mr Singh’s family have now begun an international campaign to have his case highlighted. They have been in direct contact with the Foreign Office, who have been made aware of Mr Singh’s maltreatment.
“The focus of the campaign is to encourage individuals and organisations to make reps to the Foreign Office, MP’s, MEP’s, organisations such as Amnesty Human Rights Watch and the Indian High Commission”, Miss Gakhal said.
“We have also approached the United Nations and have asked the Foreign Office to consider the exceptional circumstances of the case and intervene.
“The campaign has received incredible support from many human rights organisations around the world.”
The Sikh Federation also urged its members to exert pressure on their local MP’s to bring Mr Singh’s case to the fore. They said they have already contacted over 200 UK MPs and all UK MEPs about Mr Singh’s case.
With Mr Singh’s case having already begun, Miss Gakhal said she was “positive” her father would be “home soon”.
“We are hopeful he will be home soon especially as we know he is innocent”, she said.
“The trial has started and this is good news. Once the matter has been considered by the judicial system, given that there is no credible evidence against my father or the two men arrested with him, we are positive he will be acquitted of all charges.”