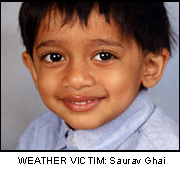 A TWO year old boy who died when a wall collapsed on him as gusts up to 99mph wrecked havoc across the country yesterday has been named.
Saurav Ghai, was killed when he became trapped under a pile of bricks in Southampton Toad, Kentish Town, north-West London.
He was rushed to a local hospital and pronounced dead yesterday afternoon.
Ten people have now died after the country was battered with strong winds and heavy rain.
The transport network was hugely affected by the weather with a number of train stations closing for the day.
There were also warnings to stay off the roads unless necessary.
A relative of Saurav said: “He was a beautiful boy – he was smiling from the day he was born, that’s how we will remember him.”
He was walking with a childminder when the incident happened. She was injured and was also taken to hospital.
In the Midlands Richard Heard, 49, managing director of Birmingham International Airport, died when a tree branch went through his windscreen.
Elsewhere a lorry driver died in Skipton, North Yorkshire when her lorry left the road, overturned and landed part-way in a canal.