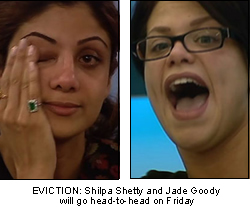 CELEBRITY Big Brother contestants Shilpa Shetty and Jade Goody will go head-to-head this Friday after both were put up for eviction following nominations.
The public will finally get their chance to act over a week long row over racism and bullying in the Big Brother house.
Ofcom revealed today the number of complaints they have received has risen to 30,000, with Channel 4 confirming a further 2,000 had been made direct to them.
Last nights highlights show threw up further angry scenes in the house following a row over oxo cubes.
Goody, who is favourite to be evicted on Friday, launched into an expletive-ridden rant at the Bollywood actress saying she was “fake” and needed “a day in the slums”.
Fellow contestants, Danielle Lloyd and Jo O’Meara who have been instrumental alongside Goody in targeting Shetty, looked on and laughed as Goody continued her onslaught.
At one stage Shetty asked O’Meara to help calm down the situation to which she proclaimed Goody was correct in her rant.
As Shetty walked away from the confrontation Lloyd said: “She should f*** off home”, and “she can’t even speak English properly”.
While there has been some debate over whether the treatment dished out by the trio to Shetty is racist, the actress herself told fellow housemate Cleo Rocos she did believe she was being targeted because of her race.
Rocos, comforting the Bollywood actress following Wednesday’s row, told Shetty: “I don’t think there’s anything racist in it.” But Shetty said: “It is, I’m telling you.”
Previously housemate Jermaine Jackson has also revealed he thinks the abuse directed at Shetty is down to race.
With Big Brother bosses refusing to budge on the issue and sticking to their statement in which they say “matters of bullying or racial abuse in any form are taken extremely seriously”, they may now be forced to act after sponsors of the show Carphone Warehouse confirmed they would not be supporting the show anymore.
In a move that would financially hit the programme, the telecommunications company said they have suspended their sponsorship deal “with immediate effect” while television watchdog Ofcom have told the channel they must act over the race row.
Speaking at the Oxford Media Convention today, Ed Richards gave a short statement to confirm the broadcasting watchdog was monitoring the reality show and will contact the channel shortly.
“Clearly what is happening is very serious, any allegation of racism is very serious,” he said.
“We will write to Channel 4 in the next couple of weeks and they will respond within a few weeks of that letter,” stated Richards.
He also said it was the responsibility of the broadcasters to stay within the ethical code in the meantime.
Related Articles:
British Asians lead wave of Celeb BB criticism
Celeb BB in massive ‘racism’ row
Bolly Babe getting flirty in BB house