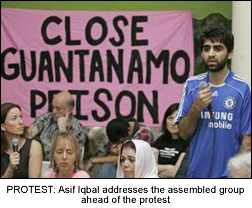 A BRITISH Asian who was held at America’s notorious Camp X-Ray for more than two and a half years has spoken of his ordeal ahead of a planned protest march to the gates of the detention camp.
Asif Iqbal, from Tipton in the West Midlands, spent nearly three years at the camp after he was accused along with two friends, Ruhel Ahmed and Shafiq Rasul, of fighting alongside the Taliban. Despite never being charged and repeated calls for their release, the trio were finally released without charge in 2004.
Mr Iqbal is set to join American peace activists and families of those still being held at Guantanamo Bay in a protest march to the gates of base on Thursday to demand the closure of the prison.
The protest, one of many across the world, will mark the five-year anniversary of the detention camp when it opened its doors to the first detainees following the 9/11 attacks.
Speaking to reporters ahead of the protest, Mr Iqbal, who has repeatedly called for the closure of the detention camp since his own release, said he was “brutally tortured” for three months.
“I was brutally tortured for three months while they showed me videos with Osama bin Laden and claimed I was present at that meeting,” he said.
He also recalled being in isolation and subjected to loud sounds and extreme temperatures of heat and cold and saying it would continue until he “confessed” being present in that meeting with the Al-Qaeda chief.
“However, three of us were lucky because the British government explained we were in Britain at the time,” Iqbal added.
Eight British residents are still being held at the detention camp despite criticism from human rights groups.
Among them is Omar Deghayes whose mother Zohra Zewawi will join the protest group on Thursday.
Here in the UK a candlelit vigil is to take place outside Downing Street in an attempt to put pressure on the government to secure the release of the eight British residents.
Prime Minister Tony Blair has been accused of not doing enough to secure the release of the men.