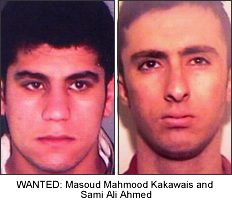 DETECTIVES in Leicester have launched a fresh appeal for information on two men still wanted in connection with the murder of a man who was stabbed to death in Leicester city centre last January.
Police believe victim Rebwar Osman Samin was stabbed in a fight after leaving a restaurant on Humberstone Road in the city centre on 11 January.
He was found in Clyde Street and later died in Leicester Royal Infirmary.
Days after the murder police released the details of two men wanted in connection with Mr Samin’s murder.
Police issued photographs of Masoud Mahmood Kakawais (22) and Sami Ali Ahmed (24) in March 2006 and a number of appeals for information were made both locally and nationally throughout the last year.
Detective Superintendent Chris Thomas is leading the investigation, he said: “Despite a number of media appeals for information about the whereabouts of Kakawais and Ahmed in the last year we are still no further in locating them.
“Kakawais and Ahmed are both Iraqi nationals and are known to associate with the Kurdish community. There is a strong possibility that these men may have left the county and could be living within the Iraqi or Kurdish community somewhere in the country.
“I would urge anyone who knows of their whereabouts or recognises them to contact the police immediately.”
Anyone with any information about these men or the incident is asked to contact Leicestershire Constabulary on (0116) 222 2222 or Crimestoppers, which is free* and anonymous, on 0800 555 111